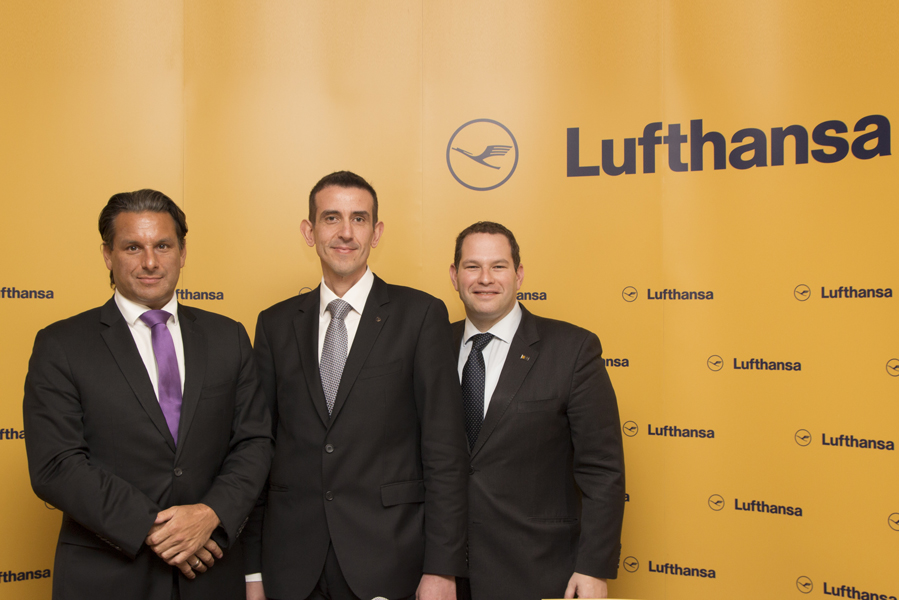 This summer, the Lufthansa Group Airlines will operate some 200 flights per week from Greece, it was announced on Monday during a press conference in Athens.

Lufthansa’s 2016 summer schedule will also bring new services to Santorini and Corfu. The two Greek islands will each enjoy one weekly flight to Munich.

“The Lufthansa Group has developed strong links with the Greek business and tourism industry and we are proud that one of our best, local talents has taken the reins of the company, here in Athens,” said Tamur Goudarzi-Pour, vice president of Sales & Services for Southeast Europe, Africa and the Middle East, while introducing Konstantinos Tzevelekos, Lufthansa’s new general manager for Greece and Cyprus. This is the first time Lufthansa has placed an executive of Greek origin in this position.

“It is my honor to manage the dynamic team of Athens, which offers our passengers in Greece and Cyprus a wide variety of travel options”, Mr. Tzevelekos said.

“The Lufthansa Group has the richest destination portfolio worldwide. Through our hubs and Star Alliance partners, our customers can travel from Alta in Norway to Cape Town in South Africa, and from Anchorage in Alaska to Auckland in New Zealand”, he said.

During summer 2016, the airlines of the Lufthansa Group will offer over 23,140 weekly flights. Via their Frankfurt, Munich, Zurich, Vienna and Brussels hubs, and also with numerous point-to-point connections, the Group’s airlines will serve 316 destinations in 101 countries (compared to 321 destinations in 103 countries in Summer 2015).

“In addition to our own flights, we offer more than 18,000 flights weekly through codeshare partnerships, ensuring local markets worldwide coverage,” Mr. Tzevelekos noted.

Moreover, within the last six months, Lufthansa has strengthened its network of destinations in the so-called exotic destinations, among them Tampa in Florida, Mauritius in the Indian Ocean, Malé in the Maldives and Porto in Portugal.

According to Mr. Tzevelekos, Lufthansa’s two new routes to Panama and San Jose in California are very important for the Greek market.

The 2016 summer schedules of all the member airlines of the Lufthansa Group will be valid until October 29.

During the press conference, reference was also made to the Lufthansa Group’s fleet renewal program. The Group has over 260 aircraft on order for delivery until 2025 worth 36 billion euros at list price. These include Airbus A320neos, Boeing 777-9x and Airbus A350s.

Additionally, the Group has invested in the new Satellite Terminal, an extension of Terminal 2 at Munich Airport and which is expected to launch in late April. The new structure will expand annual capacity by 11 million passengers annually and offer Lufthansa and its Star Alliance partners an additional 52 gates and 27 new aircraft park positions.

The Group also continues to invest in providing WiFi connection in aircraft of small and medium distances.

In 2015, the Lufthansa Group generated international passenger revenue of some 32 billion euros.