Sky Express in April will launch two new routes from Athens, as part of its summer 2016 flight schedule.

The Crete-based airline will operate daily flights from the Greek capital to/from Santorini and to/from Mykonos as of April 21.

The flights will operate on Sky Express ATR42 aircraft. All of Sky Express passengers, departing from Athens International Airport (AIA) to Santorini and Mykonos are entitled to use the “Business Lounge – Melina Merkouri”. 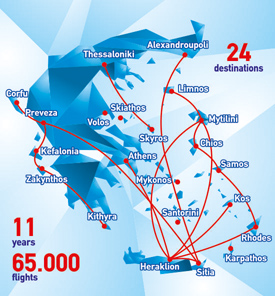 On a year round basis, Sky Express flies from Rhodes to Chios, Samos, Lesvos and Limnos; from Corfu to Lefkada, Kefalonia, Zakynthos and Kythira; and from Sitia to Alexandroupolis.

Sky Express recently won the award of “Fastest Growing Airline Thin route for 2015” at the 16th Airline Marketing Workshop held in Athens earlier this month and was awarded as Airline of the year 2014/15 Silver Winner from E.R.A (European Regional Airlines).

In its 11th year, Sky Express has operated over 65,000 flights, serves more than 20 Greek destinations and has Jetstream and ATR aircraft.

Starwood to Merge with Marriott Under Revised Agreement