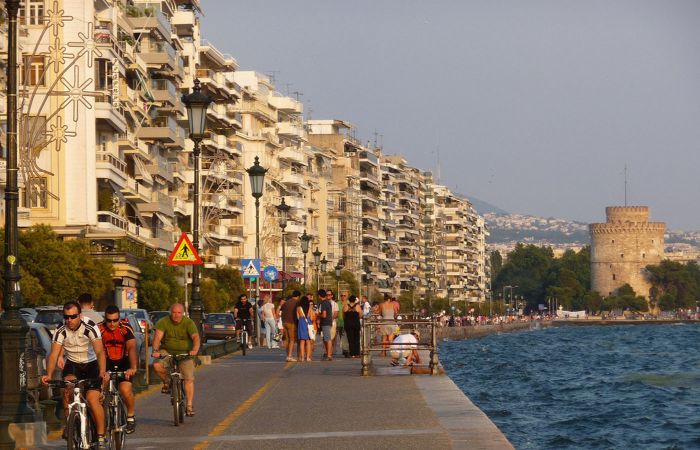 The Thessaloniki Hotels Association predicts an increase in last minute bookings to Greece this season but expresses concern regarding the impact of the refugee crisis on the destination.

“We are receiving positive messages for all Greek destinations, but on the other hand there is a pervasive concern about what is happening and evolving around us in regards to the refugee crisis and the general crisis in the Middle East”, the association’s president, Aristotelis Thomopoulos, told the Greek Travel Pages (GTP) on the sidelines of the ITB trade show in Berlin last week.

He added that an agreement between Turkey and the European Union to curb the refugee crisis would have a positive effect on bookings to Greek destinations.

The association for another year participated in ITB as a coexhibitor in the Greek National Tourism Organization’s (GNTO) stand and was represented by Mr Thomopoulos, Konstantinos Tornivoukas (vice president) and Evdokia Tsatsouri (marketing). A number of hoteliers and travel agents from Thessaloniki were also based at the stand.

Aiming for Thessaloniki to gain the status of a top city break destination, the association strengthened its contacts with European tourism professionals at ITB.

“Thessaloniki is a special urban destination — a city break destination — and we are here at ITB Berlin, as we are every year, having meetings and trying to increase the city’s brand awareness to the European players”, he said.

In regards to bookings for the summer season, Mr Thomopoulos said that in the last two months Thessaloniki saw a drop in reservations due to the mobilizations of farmers which included the blocking of the national highways.

“At the moment, the decline in bookings is between 15 to 20 percent”, he said.

“Of course, Thessaloniki is not like other summer destinations as it mainly receives individual bookings and not bookings by tour operators… In other words, reservations to Thessaloniki are made as time progresses”, Mr Thomopoulos added.

Overall, he said that he was “cautious” but not pessimistic in regards to this year’s tourism performance.

In regards to the German market, Mr Thomopoulos said that visitation at the association’s stand at ITB was considerably higher than last year, which was encouraging.

“Thessaloniki is gaining ground in the German market because of its attractiveness as an alternative travel destination combined with the frequency of air connections to German cities”, he said.