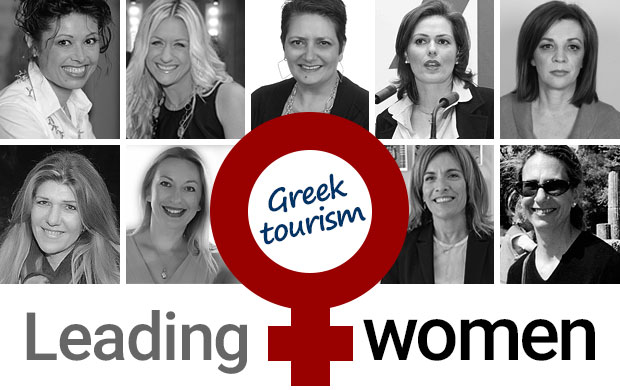 The gender gap is expected to grow even wider, according to a World Economic Forum report released earlier this year, which found that women will lose 2.45 million jobs through to 2020.

For tourism in general, and tourism in Greece, specifically, this is sad (and bad) news. And though in most of the world’s travel destinations women make up the majority of the tourism workforce, they are still concentrated in the poorest paid and lowest status jobs, earning 10-15 percent less than their male counterparts and most of the times performing a great deal of unpaid work in family tourism businesses.

Remember the Greek mother and grandmother stowed away somewhere in the chaotic kitchen of an otherwise chic taverna preparing those delectable Greek gourmet treats which her son, husband or grandson serve you at those sunny Greek island hotspots?

How about that spotless room, complete with well-made beds set in perfectly ironed white sheets and handpicked flowers added as a welcoming note at some family-owned inn on some remote Aegean islet?

Or at those luxury hotels where someone seems to always be hanging the endless laundry, doing most if not all of the menial jobs of the establishment?

Chances are these employees are almost always women.

According to December Eurostat figures, six in every 10 employees in Greece’s tourism sector in 2014 were women, accounting for half of employment in core tourism activities or 51 percent, compared to 58 percent in the EU.

And though female employees undoubtedly demonstrate persistence, resilience and efficiency, they are still “not at those tables where decisions are made”, again in the words of Sheryl Sandberg, COO of Facebook: “men still run the world – and I’m not sure it’s going that well”.

Greek Women at the Wheel

At the same time, a recent ICAP Group study revealed that the number businesses in Greece with women at the wheel grew in 2015 by 21 percent compared to 19.6 percent in 2014, with seven out of 10 holding both dominant positions but also shares in the said companies.

The “Leading Women in Business” study by ICAP’s Department of Finance – Sector Studies found that 50.6 percent of the females sampled held a graduate degree and 35.3 percent a post-graduate title. A percentage of 36.5 were in the 50-59 age bracket, 78 percent were wed, and 79.3 percent had children. Despite 58.6 percent working more that 10 hours a day on average, 59.7 percent said they expect to expand their business activities in the next five years.

The Girls Behind the Great Men

More females are now sitting on the boards of the Greek tourism sector’s numerous foundations, associations, federations and bodies. Prime examples include the Hellenic Association of Travel & Tourist Agencies (HATTA) with six of its 15 board members being women, or 40 percent. The Hellenic Yacht Brokers Association (HYBA) currently has four out of seven – or 57 percent – of its board activities in female hands. And the Panhellenic Tourist Guide Federation (POXEN) boasts a massive 62 percent female participation on its board with five in eight running the show. Not to mention Elena Kountoura, who is currently alternate tourism minister.

In the meantime, a mere 7.9 percent were board members in Greece’s largest listed companies, against the EU average of 15.8 percent in 2013.

What Do These Women Have to Say?

A’ Vice President, Board of the Hellenic Yacht Brokers Association (HYBA), Founder and Manager of ELYSEE Yachts Ltd

“A woman at the helm? Women in the yacht charter industry are surprisingly not that rare. It is an area which requires many skills we are rather familiar with: dedication, multi-tasking abilities, strong public relations, diplomacy, good negotiation skills, and above all, adaptability and flexibility.

Every charter is a challenge; each client is unique, so is every yacht, and expectations are great when we are called on to design a special holiday for our distinguished clients.

You are successful only when you are completely dedicated and passionate about what you do… and the rewards are the knowhow and insight into the finest life has to offer at sea and on shore. It is tourism at its highest level …with a woman at your service.”

“The tour guide sector is one of the few in tourism and in general, where women are a majority. In some cases, we have associations-members in which female tourist guides account for 80-90 percent of the total.

This is very good. It shows that people trust us and that we can do a good job. Qualified colleagues are flexible, smart, studious, consistent; the perfect ambassadors to represent their countries and their heritage.

Despite the progress in technology and the many challenges facing our profession, I am optimistic that there is still a future for us women in the tourist guide industry because the human factor, the warmth and sense of hospitality cannot be replaced.”

“The need for a refined touch and for good taste have always been at the center of life and that’s what increased the need for a female presence in the tourism industry in Greece and abroad.

As is the case in all fields of entrepreneurship including tourism, women’s participation has increased over time, demonstrating their capacity and capabilities in an up-to-now male-dominated area.

A female presence in business, and particularly in tourism, is valuable and called for, and when combined with the capabilities of her male counterparts leads to a successful whole which heightens the quality of offered services thus contributing to a stronger tourism season every year.”

Board member of the Hellenic Association of Travel & Tour Agencies (HATTA), Manager of Signature Travel

“The contribution of women to the development of tourism is undeniably significant. It’s not by chance that in the last years women are at the helm of the Greek tourism ministry with obvious positive results demonstrated by the growing numbers of tourists.

Females are by nature creative, warm and expressive, and tourism professions expose these traits. It’s no coincidence that statistically the majority of those employed in tourism are women.

I am confident that in the future, women will climb the corporate ladder as they rightfully deserve and claim even more posts in the sector.”

“Tourism, whether for recreational or professional purposes, is an opportunity to relax and see new things, and this undoubtedly plays a positive role on the mood of the traveler. Women give birth to life, literally and figuratively. Females are by nature armed with many traits that are instrumental to tourism, such as kindness, good spirits, ability to offer hospitality and care. It is therefore obvious that the female disposition is perfectly suited to tourism and a woman’s role in the sector should thus be central, particularly when considering the ‘female touch’ which is essential for any traveler to feel they are receiving exclusive treatment.

Each holidaymaker should be treated differently, just like we treat our children. And only a woman, due to her motherly nature, is prepared to bring to her profession the love and dedication she brings to her most demanding child.”

Women in Tourism: A Global Perspective

Understanding the significance and the role women can play in the future of tourism, the United Nation’s World Tourism Organization (UNWTO) set up the Women in Tourism Empowerment Program (WITEP) aiming to promote women’s economic empowerment in tourism through participation and partnerships with hotel chains and other stakeholders.

A first step in this direction came during the ITB Berlin in 2011, with the launch of the Global Report on Women in Tourism marking a first attempt to map women’s active participation in the tourism industry worldwide. The report was a landmark for both tourism and gender, focusing on five main areas: employment, entrepreneurship, leadership, community and education.

The bottom line is that more must be done to narrow the gender gap, ensuring equal pay for men and women for equal work, raising employment quality and ending discrimination. In order for this to be achieved, governments must improve employment and entrepreneurship opportunities for women by facilitating their access to jobs and participation in supply-chains and by paving the way for career advancement.

On Tuesday, March 8, women across the globe will be commemorated for International Woman’s Day. Whether one agrees or disagrees with a “special” day for the majority of the population is another story. We should however take this chance to ensure that we – men and women alike – “Make it Happen”, which is this year’s theme (#PledgeForParity)… taking heed of the of the UNWTO’s recommendations.