A Dionysian Carnival on Naxos – All Events

The curtain opens and the island of Naxos — from March 1 through Clean Monday, March 14 — transforms into an interactive stage hosting a multitude of events that highlight the island’s unique cultural and culinary flavors of Carnival.

Titled: “Dionysian Carnival on Naxos,” the event program — combining the revival of old customs and long-lived traditions, with contemporary surprises too — is sure to awaken the senses.

From the buzzing port and the Temple of Apollo (“Portara”) to its charming villages, Naxos during Carnival comes alive with traditional events, revivals of Dionysian customs, popular Torchlight Parade, Grand Carnival Parade and lots more. 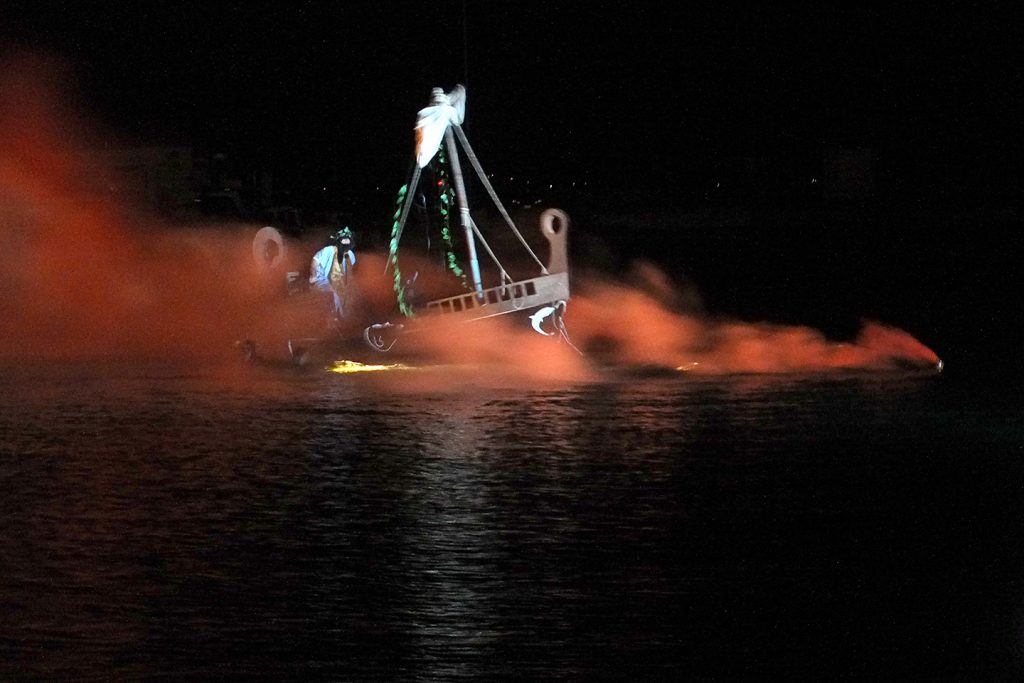 The abduction of Dionysus by the Tyrrhenian Pirates.

The scheduled program of events is as follows:

“Escape from the Cheese Factory” (Escape Room), Chora Naxos-Port Promenade, March 1-March 14
Surprise event this Carnival on Naxos comes from the Union of Agricultural Cooperatives of Naxos and the Escape from the Cheese Factory-Escape Room. Modeled after the interactive TV game Escape Room, the group of maximum six participants, who have entered to steal the magic recipe of the Naxos graviera (gruyere) cheese, is given 30 minutes to solve the mystery puzzle to get out. If they do not succeed, they become prey to “cheese mice!”

A Naxos Tsiknopempti in Athens, Galatsi Olympic Hall, Galatsi, Attica, Thursday, March 3rd, from 8:00
Can’t make it to Naxos for Tskinopempti? The Union of Agricultural Cooperatives of Naxos in collaboration with the Municipality of Galatsi, brings the flavors and festive mood of Naxos to Athens! The charcoal lights up at 8 am as the Chef Club of the Cyclades and Dodecanese offer free Naxian delights (Naxian meats, potatoes, cheese, salad and wine). Entertainment by the musical group of Eleni Legaki. 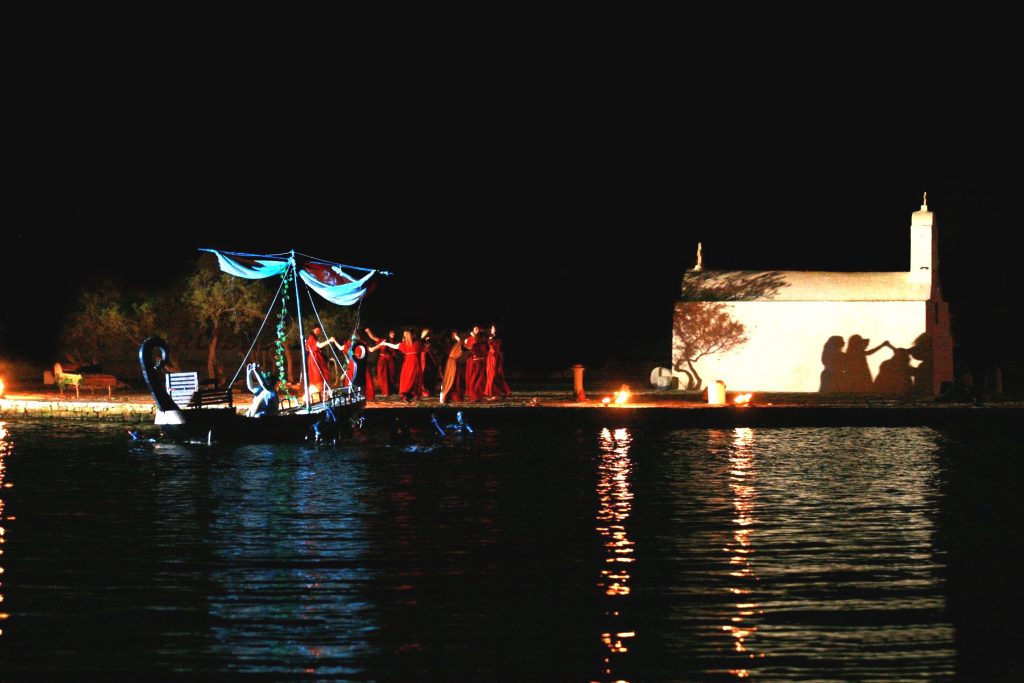 The abduction of Dionysus by the Tyrrhenian Pirates.

The Naxos Torchlight Parade – Lambadifories, Venetian Castle, Kastro, Old Town, Port Promenade, Saturday, March 12, 21:00
Highlight of the Carnival festivities on Naxos is the Torchlight Parade. On the Saturday eve before the annual Carnival parade, the streets of Naxos overflow with a crowd of torchbearers in a revival of an ancient custom known as Lambadifories. Dressed and masked in black and white costume, hundreds of natives and visitors of all ages take part. Preparations begin at the former Ursulines School, in the Kastro at 19:00, with the official start of the parade beginning at 21:00. It ends at the main square at the port, where dancing and merriment continue into the night. 2014 was the event’s 20th anniversary.

Grand Parade of Carnival, Chora Naxos-Port Promenade, Sunday March 13, 11.00
The legendary myth of Dionysus and Ariadne (according to Greek mythology the god of wine and merriment fell in love with princess Ariadne on Naxos) comes to life on Sunday, as groups retell the tale in thematic costume at this year’s Grand Carnival Parade. Groups wishing to participate should contact the organizing committee at +30 6977387578.

CARNIVAL IN THE VILLAGES OF NAXOS
Enjoy the long-lived traditions and customs of Carnival in the many charming villages of Naxos, and get transported to a different era. Witness the proud ribbon-adorned men known as “Kordelatoi” and “Foustanelatoi” and the dynamic bell-adorned men known as “Koudounatoi.” Enjoy local music, food and wine. Dance the traditional island dances and listen to music played on traditional instruments.

The Colorful Sights and Sounds of the Koudounatoi, Kordelatoi and Foustanelatoi,
March 7, 8 ,11,12,13
The village square fills with traditional costumes and color, traditional island sounds and dance. In the mountain villages, such as Apiranthos, Filoti and Koronos, the bell-clad, hooded “Koudounatoi” create a deafening noise in the alleys of the village meant to drive the evil spirits away and welcome spring. In the plains, the villages Agios Arsenios, Tripodes, Galini, Eggares, Melanes, Kourounochori and Kynidaros, welcome the impressive “Kordelatoi” and “Foustanelatoi.” Led by the standard-bearer (bairaktaris), the Kordelatoi (Foustanelatoi) — wearing the national Greek costume, foustanela, adorned with ribbons — visit the neighboring villages, and, accompanied by the music of violins and lutes, invite the women to dance. The tour ends at the village square where the feast and dance begin.

The carnival is organized by the Municipality of Naxos and Small Cyclades.