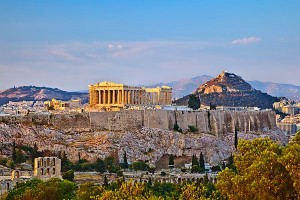 Cultural tourism is one of the fastest growing markets worldwide and yet Greece seems to be lagging behind, according to findings announced recently by the Athens-based Center of Planning and Economic Research (KEPE).

KEPE identifies lacking infrastructure as one of the main reasons Greece is still not seeing large numbers of cultural travelers, adding that direct and quick transportation to major archaeological sites in Greece is often tedious or non-existent.

It also adds that domestic tourism accounts for the higher number of cultural travelers in countries abroad, citing France as an example where 40 percent of over-night stays and revenue comes from French holidaymakers.

In order for Greece to gain ground and tap into the numerous benefits of cultural tourism, KEPE says, there must be radical reform, unification and simplification of structures and access as well as a more up-to-date, flexible and effective operational system at the country’s cultural sites.

At the same time, KEPE experts stress the need to create a mechanism which will collect income from cultural sites and channel it back into those as well as allowing cultural institutions, museums, etc, to be able to manage and use a portion of the revenue as they see fit.