Etihad Airways Presented with Airline of the Year 2016 Award 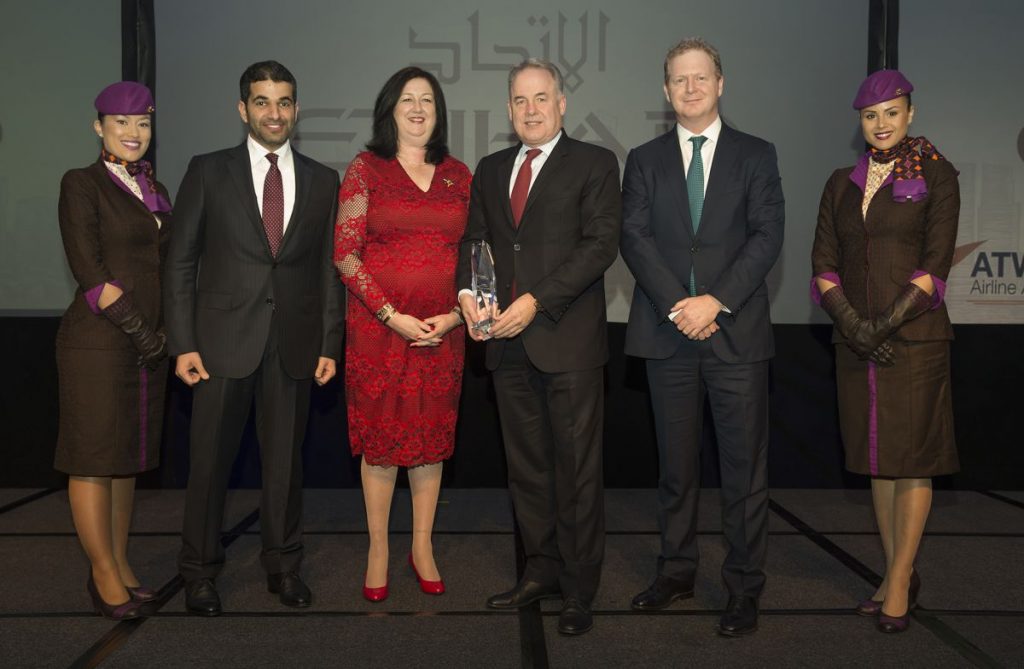 The accolade acknowledged Etihad Airways’ strong executive leadership team in developing a profitable strategy of organic growth and unique equity partnerships; introducing ground-breaking products and services; creating the foundations for building a motivated workforce; and engaging in a diplomatic, dignified defence of its business model in the wake of fierce opposition by US carriers.

Etihad Airways was chosen for the top honour by ATW’s distinguished editorial board in a highly contested competition, with entries from more than 100 airlines around the world.

The award was presented at a Gala Dinner on February 15 attended by industry peers at the 42nd edition of the annual ATW Airline Industry Achievement Awards on the eve of the Singapore Air Show.

“This award recognises what we set out to do as an airline 13 years ago – to be safe, profitable and simply the best”, James Hogan, Etihad Airways’ President and Chief Executive Officer, said.

To earn the top accolade, ATW said an airline must demonstrate exceptional achievements and capabilities across its operations, financial performance, customer service, safety and employee relations. The executive leadership team must also clearly show innovation and strategic thinking that sets the company apart.

“Etihad Airways is clearly an airline apart from the pack and one that sets its own course”, Karen Walker, Air Transport World Editor-in-Chief, said.

The airline was recognised by ATW’s editorial board for “fast but thoughtful growth, consistently delivering against its targets and always thinking ahead.” The airline was also applauded for its “excellent numbers on financials, cargo and safety.”

During 2015, Etihad Airways launched six new routes on three continents taking its global network of destinations to 116 with a fleet of 121 aircraft. More than 17 million guests flew on Etihad Airways last year, up from almost 15 million in 2014. Etihad Airways also launched its new Boeing 787 Dreamliner – the first of 71 on order – and phased in the first of 10 Airbus A380 aircraft into its fleet.

Air Transport World is an authoritative monthly magazine serving the needs of the global airline and commercial air transport manufacturing communities. ATW’s Airline Industry Achievement Awards were created in 1974 to recognise excellence across a broad range of airline operations and are widely considered as the most coveted in the aviation industry.