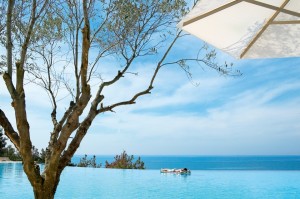 The popular Halkidiki peninsula in Northern Greece has grown into a hot luxury destination with more than 25 new hotel units constructed in the last 15 years, according to a study released by the Institute for Tourism Research and Forecasts (ITEP).

The ITEP report, commissioned by the Hellenic Chamber of Hotels (HCH), found that the number of hotels in Central Macedonia increased by approximately 33 percent, while those in the three highest categories grew by approximately 126 percent from 2000 to 2015, demonstrating an active turn to quality and an far-reaching upgrade of the Central Macedonia region’s accommodation facilities.

There are currently 1,190 hotels with a total capacity of 44,402 rooms and 87,182 beds operating in Central Macedonia, accounting for 12.3 percent of hotels in the country, or 11.0 percent of total rooms and beds. At the same time, the region boasts the largest number of international tourist arrivals and comes third in terms of overnight stays at an average 6.2 days versus 8.4 was for the whole of Greece.

In the meantime, the study found that in four of the seven regional units of Central Macedonia there are no 5- and 4-star hotels despite signs of growth in the least developed areas, which recorded an increase in accommodation capacity ranging from 94 percent to 141 percent compared to the popular Halkidiki, Thessaloniki and Pieria, where hotel capacity grew by 24 percent, 33 percent and 27.2 percent, respectively.

ITEP will present relevant findings for the remaining Central Macedonia regions during its 5th General Assembly, to be held at the Metropolitan EXPO in Athens, on February 12-15.

TUI: Greece, Spain to Benefit from Drop in Demand for Turkey