Although it opposes the government’s plans for pension and tax reforms, the General Panhellenic Federation of Tourism Enterprises (GEPOET) on Monday clarified that its members/tourist coach companies were not taking part in any protest mobilizations.

“The work of tourist coaches continues constantly, 24 hours a day, even during the current exceptionally difficult circumstances created in regards to land travel due to mobilizations of other professional groups”, GEPOET said in an announcement.

The federation, which represents tourist agencies and operators as well as tourist coach companies across Greece, last week announced its opposition over the government’s plans to proceed with further pension cuts and increase social security contributions, but did not mention participating in strikes or launching work stoppage action. 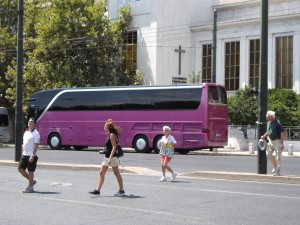 “We believe that a work stoppage would create even greater problems in Greek society… and would certainly contribute to a huge discredit for the country if we refuse to pick up tourists from cruise ship terminals or airports and not transfer them to museums, archaeological sites and other unique destinations of our country”, GEOPOET said.

“The country’s image abroad and the smooth start of the season is what comes first, even if the problems of the sector are piling up.”

According to GEPOET, the local press had mistakenly confused the federation with the Macedonia-Thrace Tour Operators Association, which has announced mobilizations “with limited geographic appeal”.

The owners of tourist coaches/members of the Macedonia-Thrace Tour Operators Association participated in the general strike held on February 4 in Greece along with other trade bodies in protest to the proposed reforms.

The association’s tourist coaches/members have announced a 4-hour work stoppage on Tuesday, February 9, from 8:30 am to 12:30 noon.

As part of the mobilization, the owners will line their tourist coaches at two points: on the national Thessaloniki-Moudania road, after the Therme overpass, towards Thessaloniki and on the Old Railway Station Road, near the One Salonica Outlet Mall (former City Gate).