A number of city hotels are set to open their doors in the center of Athens this year, giving visitors to the Greek capital an even wider choice of exclusive accommodation.

According to an updated GBR Consulting report on the hospitality market, there is plenty of investment activity going on in the Athenian hotel market.

This year, Electra Hotels will open its new 220-room 5-star hotel on Mitropoleos Street at the former Education Ministry.

New arrivals also include the opening of a small boutique hotel The Zillers to open on the same street and nearby the Met 34 with luxury apartments to open in March.

Furthermore, the former fashion House Hotel on Omonia Square has been leased for 40 years by Mage Hotels and Resorts and will open towards the end of April 2016 as the 4-star Athens Tiffany Hotel.

Meanwhile, following the opening of a 39-room 4-star hotel in Kolonaki last December, Coco-Mat Hotels and Resorts is planning another hotel for 2017 in the area of the Acropolis Museum.

Also, according to GBR Consulting, it appears that a tender in December 2015 for the lease of the Athens Lycabettus hotel in Kolonaki was successful after earlier attempts failed, but names have not been disclosed yet.

Furthermore, Dogus Holding Group, through its subsidiary MK Mykonos Hotel Company SA, acquired a property that formerly housed the Canadian Embassy in Kolonaki for the sum of four million euros and is investigating new uses. The owners of the 262-room Athens Imperial, which closed down in 2012, are in discussion to lease the property.

The Ifantis Group, through its subsidiary Athens Holiday SA, which operates the Fresh Hotel, is investigating a new hotel in the former Pindaros Hotel, located in a historic building on Sophocleous Street. Also, in Piraeus, Mektima SA is investigating the conversion of the former Metaxa spirits production location into a 4-star hotel with 100 rooms. 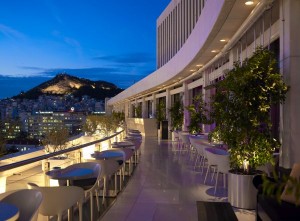 The report also noted that Alpha Bank is still looking for interested buyers for the 506-room Athens Hilton.

In 2014 Oaktree Capital and Jermyn Street Real Estate were interested to acquire the hotel from Alpha Bank’s subsidiary Ionian Hotel Enterprises for some 180 million euros and businessman John Cassimatidis was reportedly said to interested, but a deal was never completed.

Recent serious interest has come from Blackstone and Fosun for a price of between 160 – 170 million euros.