Greece has a very good reputation in the markets of the United Kingdom, Germany and the United States with respect to the attractiveness and safety of the destination, according to a survey carried out by Censuswide for SETE Intelligence that was released on Thursday.

Considering important external factors that may affect the upcoming season, such as safety concerns and the migration/refugee crisis, SETE Intelligence assigned Censuswide, an independent research company, to conduct a survey on how travellers of the UK, Germany and the US perceive Greece.

According to the study, one in three respondents from the UK, Germany and the US would like to visit Greece for their holidays in 2016.

When questioned how secure they feel in the destinations of Greece, Spain, Italy, France, Thailand and Turkey, 73 percent to 80 percent of respondents said they considered Greece a safe destination. The percentage is marginally lower than that for Spain and Italy, but significantly higher than that for France and nearly double than that for Turkey. 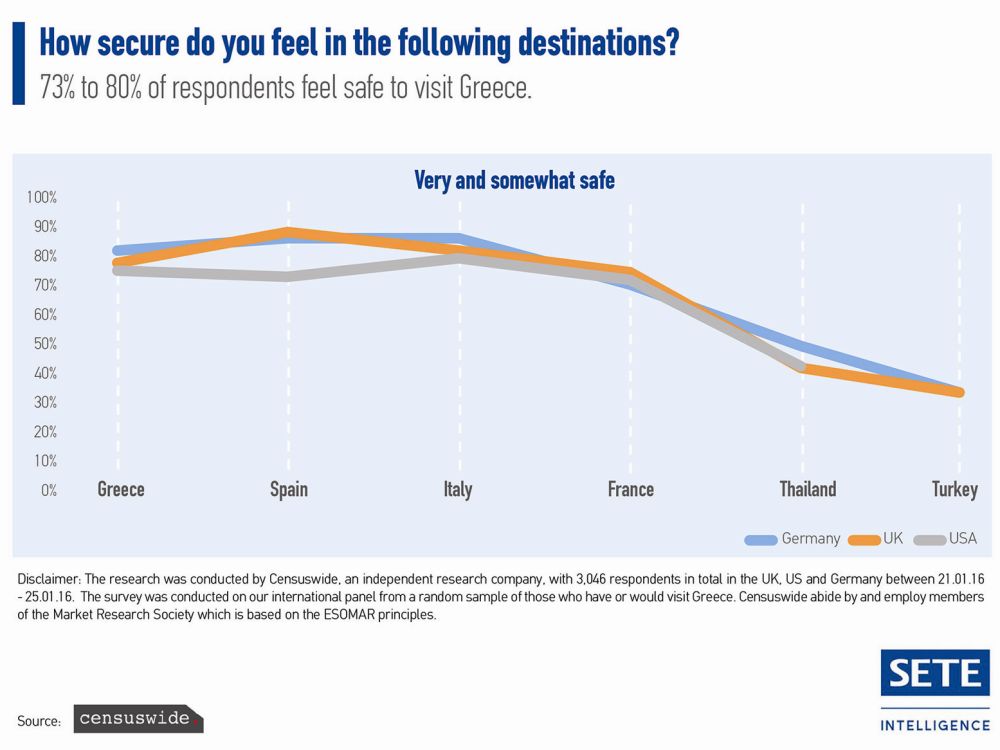 Respondents were asked if the terrorist attacks to date would prevent them from travelling to Greece, Spain, Italy, France, Thailand and Turkey. According to the study, the recent terrorist attacks do not affect the decision of some 90 percent of the respondents to visit Greece. One in four are affected negatively to visit France and one in two affected to visit Turkey.

In regards to the migration/refugee crisis, almost 40 percent of respondents said that it affects their travelling perception of Greece. On the same issue, Greece is less affected than Turkey but more than Italy or Spain.

The study concluded that Greece has a significant positive reputation in the markets of the UK, Germany and the US and that if it is maintained, the prospects of this year’s tourism period will enhance.

The study highlighted the need for the government and local government to quickly and effectively solve the challenges of the refugee issue and for Greece to meet its commitments to the European Union on receiving, recording and managing refugee flows.

Censuswide interviewed 3,046 respondents in total in the UK, Germany and the US between January 21 until January 25. The survey was conducted on its international panel from a random sample of those who have or would visit Greece.