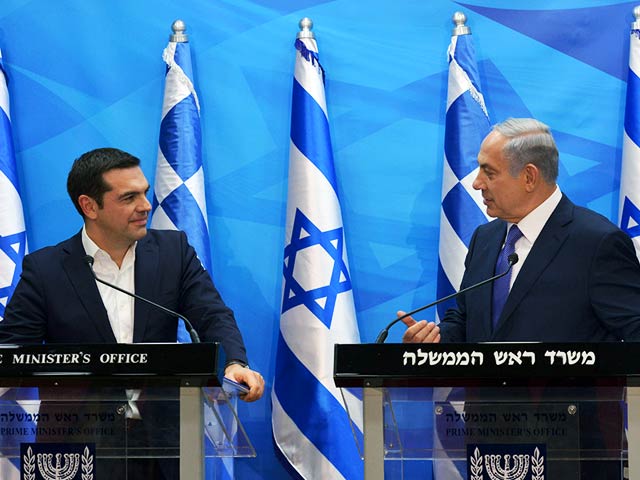 Tourism, technology, energy and transport topped the agenda of talks between Greek Prime Minister Alexis Tsipras, who was in Jerusalem on Wednesday, for bilateral talks with his Israeli counterpart Benjamin Netanyahu.

“The meeting was useful and constructive,” Mr Tsipras told a joint news conference, and invited Israeli entrepreneurs to do business in Greece and to take advantage of the opportunities available.

“We are working to promote a specific set of joint programs… it is particularly important to build up the driving force of the economy, which can be done via research, technology, innovation and exchange of know-how. We are already focusing on marine technology, desalination, the pharmaceutical industry and biotechnology,” the Greek prime minister said.

With regards to tourism, Netanyahu said he would do his best to boost tourism to Greece both in numbers and investments. “I feel I have something to contribute to tourism in Greece because I was, in my early visit to Greece, I said –I think we had only 50,000 Israeli tourists at the time. I said we’ll increase it by hundreds of thousands. Today we’re at 350,000. It’s a lot, but there can be more, and we, of course, welcome every visitor from Greece… there is a natural affinity between the Israelis and the Greeks.”

In the meantime, on Thursday, PM Tsipras attended a three-way meeting hosted in Cyprus by its president Nicos Anastasiades, with Netanyahu. The three men discussed an alliance focusing on the gas reserves in the eastern Mediterranean, as well as in tourism.

“Energy also includes not merely discussing the possibilities of using our offshore gas, but also connecting Israel, Cyprus and Greece with an electricity cable that will, for the first time, enable Israel to diversify its electricity grid and even export gas through electrical energy,” Netanyahu said on Thursday.

EMITT 2016: ‘Tourism Has a Healing Effect in International Relations’