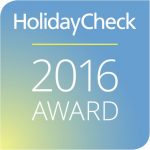 A total of 48 Greek hotels were among the 681 most popular hotels worldwide recently honored with the tourism audience prize HolidayCheck Award 2016.

The winners of the award, given by European independent travel portal HolidayCheck, were decided based on over 1.08 million guest reviews submitted in 2015 from 37 countries.

This is the eleventh year in a row that the most popular hotels across the world have been awarded based on current reviews.

The top hotel in Greece is the Villa Stella Apartments, in the destination of Kavala, mainland.

According to HolidayCheck guest reviews, these are the 10 most popular hotels in Greece:

According to travel portal HolidayCheck, there are strict rules in place for a hotel to receive the award. To be considered for this sought-after accolade, a hotel must have collected at least 50 reviews from its guests in 2015 and must have been recommended by at least 90 percent of its former guests.

Another tough hurdle that the hotels have to face are the HolidayCheck “Suns”, which holidaymakers use when reviewing hotel details like the room, location, surroundings, service and restaurant facilities.

The scale ranges from a minimum of 1 (poor) to a maximum of 6 (very good); potential Award hotels must have achieved at least 5 “Suns”.

Greek Nominees for the ‘European Museum of the Year Award 2016’