Greece May See Seaplane Flights as of Summer 2016 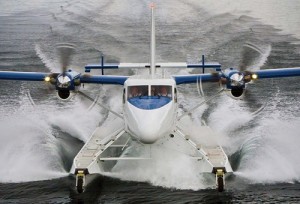 Hellenic Seaplanes expects to operate its first hydroplane waterways in Greece as of this summer.

In operation since 2013, Hellenic Seaplanes aims to create a waterway network for travel across Greece via hydroplanes. The network is expected to breath life into remote islands, open new jobs in the tourism sector and strengthen ties between local communities.

According to an announcement on Monday, the first waterways to launch seaplane flights in Greece in the summer will be those based at the Sporades islands, Volos, Skyros and Thessaloniki. Next to join the network will be the waterways in Evia (Halkida, Kimi, Edipsos, Karystos).

The company’s next step will be to launch a regional network for seaplane travel between the islands of Chios, Psara, Oinousses, Lesvos and Patmos which will include connections to Turkey.

Meanwhile, the licensing procedures for the construction of waterways in various Greek destinations including Zakynthos, Amfilochia, Sitia, Milos, Paros and Kalamata, are currently in progress.

In regards to the announced waterway at the island of Tinos, the company informed that the project, although in an advanced stage, has been temporarily suspended as the island’s port authorities have expressed objections to the position selected for its construction.

Hellenic Seaplanes also informed that the government is expected soon to amend relevant legislation in order to reduce the length of time needed to issue the permits required for the construction of waterways and also create a framework for the efficient operation of seaplanes during the upcoming summer season.

The company’s plans to include Greek lakes within its waterway network have been put on hold for the time being due to water management issues.

Hellenic Seaplanes also announced the conclusion of a course held in cooperation with the University of Piraeus, which aimed to provide the knowhow to the future executives of the waterway sector.

The company’s priority is to man the country’s waterways with highly trained professionals and ensure the direct entry into the labor market of University of Piraeus graduates.

The course, titled “Port Planning and Organization”, was held for the second year in the Department of Maritime Studies to educate future employees and executives for the operation and management of the country’s waterways.