International arrivals to Greece increased by 8.6 percent in the first nine months of 2015, compared with the same period of 2014, according to a border survey conducted by the Bank of Greece and released by the Hellenic Statistical Authority (ELSTAT) on Monday.

According to the data, arrivals from Europe — which accounts for the majority of arrivals of non-residents to Greece (88,4 percent) — registered an increase of 7.9 percent in January-September 2015 period when compared with the same period of 2014. Arrivals from EU Member States recorded an increase of 17.1 percent.

On the other hand, the data showed that arrivals from Russia and Serbia dropped by 62.1 percent and 26.5 percent respectively.

Greece saw an increase in the arrivals from other continents such as the United States (3.2 percent) and Asia, with a large contribution of arrivals coming from Turkey (4.5 percent). 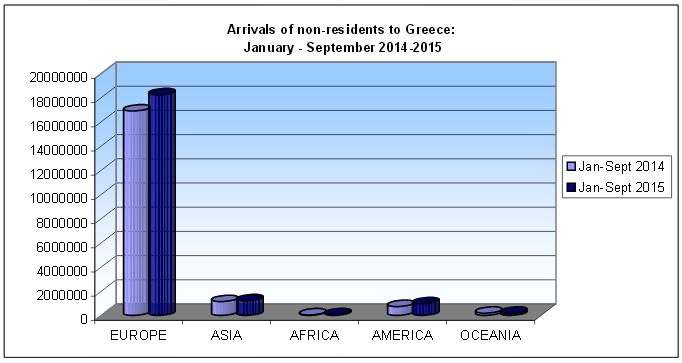 In regards to the contribution of arrivals by country of origin, the largest number of arrivals for the European countries were from FYROM (13.2 percent), Germany (11.6 percent) and the UK (10.3 percent).

The main points of entry, which account for the biggest percentage of traffic by road are Evzoni (10.3 percent) and Promahonas (6.9 percent) and by air include the airports in Athens (16.1 percent), Heraklion (10.8 percent) and Rhodes (8.2 percent). 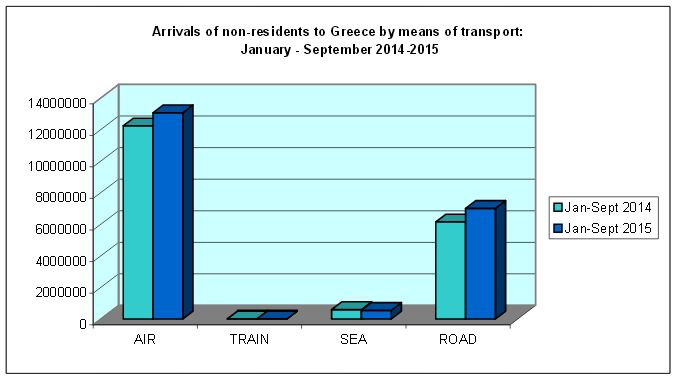