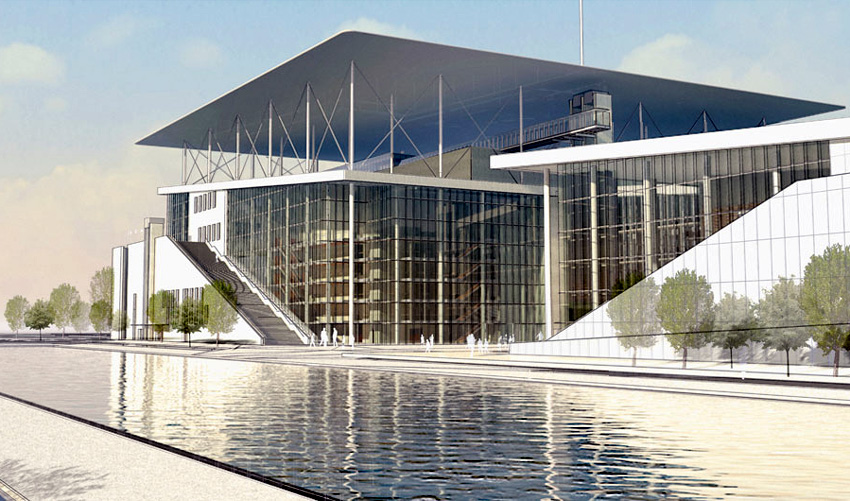 Construction of the Stavros Niarchos Foundation Cultural Center (SNFCC) is expected to be completed in the first half of 2016, when it will be donated to the Greek State, to its people, and society at large.

“After three years of incessant works, the SNFCC is maturing at a construction level is getting ready to take its next steps for its handing over to the Greek people, who — we hope — will enjoy and embrace it”, Andreas Dracopoulos, Co-President of the SNF, said on Wednesday.

With the cultural center nearing completion, the Stavros Niarchos Foundation presented the hitherto construction development of the project, on the occasion of the completion of the Energy Canopy, the last important milestone of the construction phase, and one of the most innovative elements of the SNFCC.

During the presentation it was announced that the SNFCC’s Energy Canopy is supported by 30 columns and is composed of 717 individual, precast pieces, towering over the building of the Greek National Opera.

Despite the fact that it weighs a total of 4,700 tons with dimensions of 100 x 100 meters, and its highest point is at 46 meters, the Canopy creates the optical illusion of a very light structure, suspended above the SNFCC and joining the city skyline.

The Energy Canopy has been constructed in such a way that it produces 2GWh of electrical energy per year, thus contributing to fulfilling the energy requirements of the Greek National Opera (GNO) and National Library of Greece (NGL) buildings, and to meeting the objective of minimizing CO2 emissions.

Thirty-nine months after the beginning of the construction, the following parts of the project are nearing completion within the next few months: the Lighthouse — a multipurpose room on the roof of the GNO, the glazing for the facades, the floors, the suspended ceilings, paint and lighting features, the fixed furniture equipment including the bookstands, the mechanisms of the central and the alternative stage and the sitting areas for spectators.

Furthermore, the installation of the photovoltaic elements onto the canopy will begin in December and will be completed by early February 2016, as will the filling of the Canal with sea water. At the surrounding area, the upcoming steps include the completion of the auxiliary buildings, the pathways, the sports facilities and the planting of the rest of the Park.

The total project budget amounts to 596 million euros ($831 million) and was donated by the Stavros Niarchos Foundation to the Greek State.

“The SNFCC is a testament and a commitment to the future of the country and the Greek society as a whole”, said SNF’s Co-President, Andreas Dracopoulos, said.

House Votes to Tighten Visa-free Travel to US