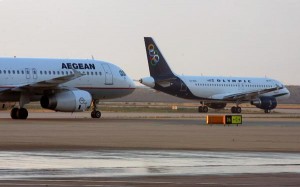 Flight cancellations have been announced by AEGEAN and Olympic Air for Thursday, December 3, due to the 4-hour work suspension of the civil aviation authority personnel (OSYPA) and the 24-hour strike announced by the Santorini Air Traffic Control Personnel. Both bodies are participating in the general strike announced by Greece’s largest civil service umbrella union ADEDY.

As a result of the action, AEGEAN and Olympic Air are being forced to cancel the following domestic flights:

Customers are kindly advised to check the latest flight details by visiting the airline’s websites or by calling: