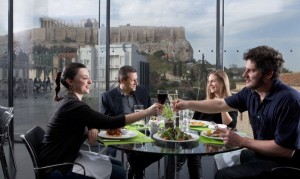 Seven in 10 Greeks believe culture can save the day and pull the country out of the economic crisis that has plagued it for seven years now, according to a country-wide poll titled “Pulse on Culture” conducted for the 1st Athens Culture Symposium held earlier this month.

Organized by the American-Hellenic Chamber of Commerce in cooperation with NGO International Relations for Culture and carried out from October 16 to 21, the report found that 86 percent believe the government must invest in culture, which they say can serve as a driving force of the economy.

At the same time participants also felt Greece’s cultural offerings were key to attracting tourism to the country, placing its archaeological attractions first followed by its gastronomy, local products, customs and traditions.

Half of those polled believe that Greece is active in promoting its culture abroad, but a large part of those feel that promotional channels are not working properly. Indicatively, 70.6 percent believe the campaign for the return of the Parthenon Marbles must change, with six out of 10 saying that the involvement of high profile lawyer Amal Alamuddin-Clooney has not helped the Greek efforts.

On a final note, 25 percent of the participants said they believe the Greek educational system has failed to instill cultural awareness and that the private sector is the primary contributor to the promotion and production of culture in Greece.