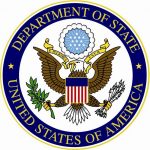 The US State Department issued a “Worldwide Travel Alert” late on Monday, the first in almost a year, informing US citizens of possible risks to travel due to increased terrorist threats, particularly ahead of the holiday season.

The alert, which comes after the Paris attacks earlier this month and expires on February 24, 2016, urges US citizens traveling abroad to monitor threats along their planned route, prepare for additional screenings and unexpected disruptions, and “exercise vigilance when in public places or using transportation… be aware of immediate surroundings and avoid large crowds or crowed places… and exercise particular caution during the holiday season and at holiday festivals or events”.

According to the warning, “the likelihood of terror attacks will continue as members of ISIL/Da’esh return from Syria and Iraq… These attacks may employ a wide variety of tactics, using conventional and non-conventional weapons and targeting both official and private interests”.

At the same time, however, Secretary of State John Kerry said on the TODAY show on Monday, that “the pace has to be picked up and more needs to be done and everybody understands that”, and added that he is aware of no “specific threat” to the US and that “people need to not panic” about the potential further terror attacks.

ETOA: ‘It is Vital that Europe is Perceived as a Safe Destination’