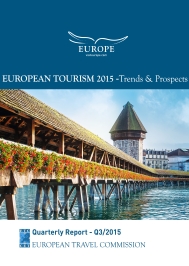 Data up to August suggest international tourist arrivals to European destinations grew steadily by 5% half way through the year proving exceptional resilience to current geopolitical agitations and slow economic growth in the Eurozone.

Data reported so far by destinations featured a positive picture, and future prospects suggest a similar performance towards this fall.

Growth was buoyed by large intra-regional destinations and the ongoing economic recovery of the Eurozone. Standout growth destinations were Iceland (+27%) and Romania (+18%). Double digit growth was also reported by Slovenia and Serbia (both +13%) and Ireland and Montenegro (+12% both). Hot spot Mediterranean destinations Croatia (8%), Italy (+5%), Malta (+5%) and Spain (+4%) also contributed to shape demand in the region during the summer period despite economic uncertainties.

It should be noted that Greece is absent from the list as the the given data for the country only covered the first three months of 2015, the report noted.

Growth was also fuelled by established source markets in Europe contributing significantly to the positive performance of many European destinations over the summer period. The United Kingdom benefitted from the strong Pound against the Euro as several destinations reported growth in arrivals from this market. Moreover, the French and the German travel markets are also spurring growth in arrivals owing to increased consumer consumption and improved consumer confidence as a result of the region’s ongoing economic recovery.

The report underlined that the region was able to offset the sag in arrivals from Russia (-18%). “Russian citizens are still travelling although opting for more easily accessible and affordable tourism destinations”. the ETC mentioned. European destinations among the Russian travel favourites are Romania, Turkey and Montenegro.

The ETC noted that following the success of European tourism during the summer period, efforts should persist to foster tourism and encourage more tourists from long-haul and intra-regional markets.

“Within Europe, we need to look at our product and our services; we need to share best practice and push deep cooperation between private and public sector” said Eduardo Santander, Executive Director of the European Travel Commission.

Greece Tourist Arrivals Up in January-October, On Track to End 2015 with Record Number