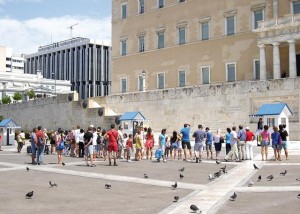 Greece welcomed 14 million international visitor arrivals by air in the first nine months of this year, 6.2 percent more than in the comparable period last year, according to data from all of the country’s major airports released by the Greek Tourism Confederation (SETE) on Monday.

According to the data, Athens once again was in the lead in terms of arrivals by air. The Greek capital saw arrival numbers grow by 25.6 percent during the January-September period. In September alone, Athens saw arrivals rise 23.2 percent compared with the same month of 2014.

The Cyclades island complex also continued its upward trend in tourist arrivals by air and saw a 14 percent increase in the first nine months of 2015.

The data showed that the whole country — not including Athens — moved on a 1.2 percent growth rate in terms of foreign arriavls.

Arrivals dropped slightly at the airports in the Dodecanese (-1.5 percent) and Crete (-0.5 percent) compared with the same period of 2014.

SETE said that this year’s goal of 26 million international arrivals and over 14.5 billion euros of direct tourism revenue is increasingly feasible, only if Greece’s market conditions remain stable, banks are recapitalized, liquidity is restored and investor interest in the tourism sector returns.

According to SETE, if this year’s tourism target is met then Greece’s GDP will see a one unit increase.

“In such a crucial time for our country, the tourism sector proves that it continues to strengthen the Greek economy and employment, as this increase will contribute to preserving at least 60,000 jobs.”

Greek SMEs in Tourism Should Prepare for NSRF Funding