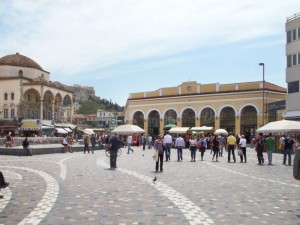 Police officers on bikes will be patrolling Athens’ historic center as well as Thessaloniki neighborhoods as part of a Greek Police force pilot program aiming to boost protection and services for residents and visitors.

Besides Athens and Thessaloniki, the program is scheduled to be implemented in other regions across the country, including Nafplion, Corfu, Rhodes and Chania on Crete.

The bicycle patrols, which were initially carried out in Thessaloniki, for the opening of the 80th International Helexpo trade fair in September, come as part of a wider policy which includes improving the Greek tourism product through face-to-face contact with visitors as well as by enhancing the feeling of security throughout Greece.

The areas and neighborhoods under bicycle patrols were selected based on tourist interest and traffic.

The officers on bikes will among others answer questions and provide information, respond to complaints, step in where there is a violation of the law, as well as patrol and be ready to deal with potential incidents.