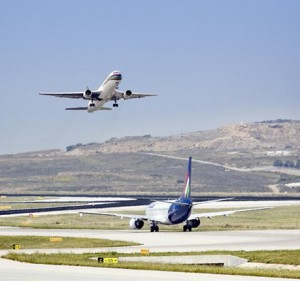 Increased incoming passenger traffic at Athens, Mykonos and Santorini airports has given ground handling services a much needed boost in the first seven months of 2015, according to data released recently by Infobank Hellastat.

Greek Tourism Confederation (SETE) figures confirm the findings, with the number of incoming tourists at Greece’s major airports coming to 8.7 million, up by 6.5 percent year-on-year, or an additional 530,000 visitors.

According to Infobank Hellastat CEO Maria Mataxogeni, total tourist arrivals to Greece this year “are expected to grow at a satisfactory pace, reaching 25 million passengers. Therefore, financial figures of ground handling providers are also expected to grow this year, affected positively mainly by the movement at the airports of Athens, Santorini and Mykonos”.

Ms Metaxogeni also noted that further market growth in the ground handling sector can be achieved through partnerships with low-cost airlines, which in the last three years have established their presence in Greece, expanding their services to include popular Greek destinations.