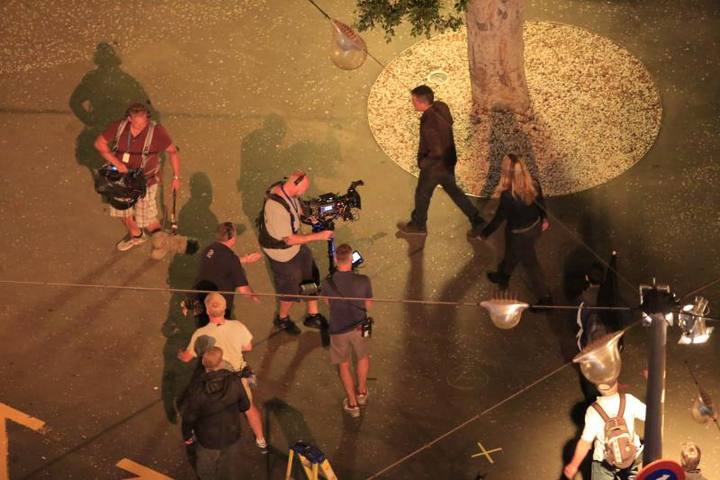 Matt Damon and Julia Stiles on the Bourne 5 set in Tenerife, which is made to look like Athens.

No, this is not Athens. This is the Bourne 5 set in Tenerife made up to look like the Greek capital.

Greeks may have been proud that Hollywood’s latest Bourne film starring Matt Damon would feature Athens… but only temporarily. The new blockbuster will indeed feature Athens … as a set in Tenerife, Canary Islands.

The producers of the latest Bourne flick decided to film elsewhere due to the fact that Greece, unlike other EU countries, does not extend tax breaks for locally-filmed productions.

Greece continues to be an unfriendly filming location due to extensive bureaucracy and unaccommodating officials with the country having lost massive revenue from international productions including a mini series on the life of Onassis, Hercules, Troy and Alexander, to name but a few.

In the meantime, neighboring countries, which have tapped into the potential of the multi-million-dollar business — one of the Top 10 most developing industries — are doing everything in their power to attract producers, including the introduction of incentives packages.

Prime examples include the latest decision by the UK allowing film production companies to claim tax relief of 25 percent payable towards the cost of production. The UK government is so keen on bringing producers to the country that Queen Elizabeth attended a shooting of “Game of Thrones” in efforts to create hype and attract attention.

Previous governments in Greece have repeatedly announced the establishment of a Film Commission but their pledges have never materialized, keeping the country out of a money-making business that would create hundreds of jobs and bring Greece into the international spotlight for a good reason.