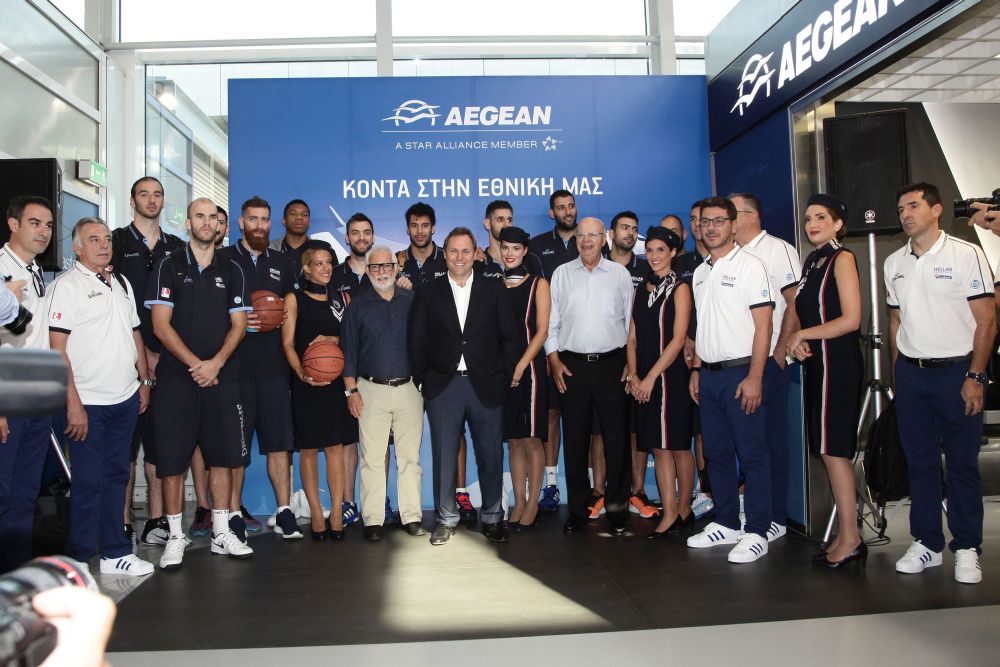 AEGEAN’s vice president, Eftychios Vassilakis (center) and the players that will represent Greece at the Eurobasket tournament, before their departure for Zagreb.

Greek carrier AEGEAN officially announced a partnership agreement with the Hellenic Basketball Federation (EOK), according to which it is the exclusive airline partner of Greece’s basketball teams.

The partnership was announced on Thursday, during a special event held at AEGEAN’s Public Lounge at Athens International Airport, shortly before the Hellenic National Basketball Team departed for Croatian capital Zagreb for the official opening of Eurobasket 2015.

The team that will represent Greece at the Eurobasket tournament departed for Croatia on an exclusive flight chartered by AEGEAN.

“It is a great honor to support the national basketball team because it is a team linked with success and has proven many times that with persistence, passion and cooperation, even the impossible can be accomplished”, AEGEAN Vice President Eftychios Vassilakis said.

“I wish the players of our national team another success and I want to assure the players that AEGEAN will always stand by them. Besides, in our hearts they are always winners! Good luck!”

AEGEAN has launched a contest on the occasion of Eurobasket 2015 and invites everyone to post “good luck” wishes for the national team with the hashtag #kontastinethniki. Each point the national team scores in the Eurobasket tournament will be converted to Miles + Bonus miles by AEGEAN. The miles will be given to 10 lucky winners after a draw.

Following is a video AEGEAN made for the Greek basketball team that contains wishes of good luck from fans in view of Eurobasket 2015.

GTP wishes the best of luck to the players of the Greek basketball team.