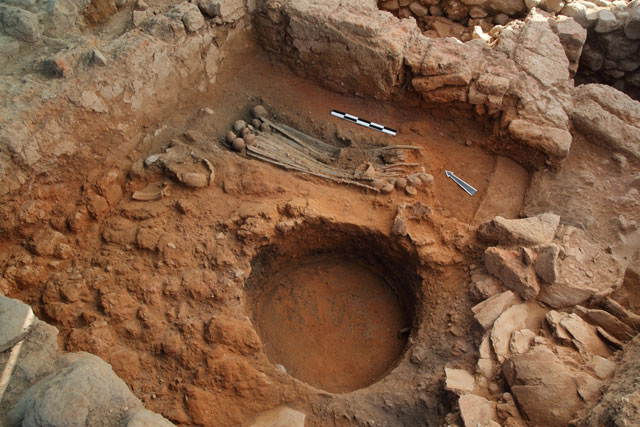 Remains of the room where the Mycenaean palace’s archive is believed to have been located.

Excavations near the Peloponnesian town of Sparta have revealed a Mycenaean palace dating back to the 17th-16th century BC as well as several Linear B tablets, the Greek Culture Ministry announced on Tuesday.

The palace complex, which is located on Agios Vassilios hill near the ancient village of Xyrokambi in Laconia, is built around a large central courtyard and decorated with frescoes. Archaeologists believe a fire destroyed several of the buildings.

A plastic rhyton in the shape of a bull’s head.

Excavation works in the area have been in progress since 2009. Experts believe more constructions will emerge. Among the most important finds thus far are Linear B tablets and seals, which seem to have been preserved by a fire. The objects were unearthed in what is thought to have been the palace’s archive. Linear B script was used in Mycenaean Greek and is considered the earliest attested language form of Greek, predating the Greek alphabet by several centuries.

Halkidiki Offerings on Show in Milan, Make the News in China