The strategic investment of Etihad Airways into Jet Airways is delivering strong results for both airlines across areas including network growth, revenue enhancement and operational and cost improvements, senior executives from the airlines said recently.

The two airlines together now offer more flights to and from India than any other airline, with a 21 percent share of the country’s booming international air travel market.

Since Etihad Airways’ 24 percent investment in Jet Airways was finalised in November 2013, the two airlines have increased from nine to 15 the number of direct routes between India and Abu Dhabi, introduced wide-bodied aircraft on key routes, and increased to multiple daily flights in some markets.

Addressing the media Mr Goyal, Mr Hogan and Mr Ball said that the airlines now offer a combined total of 40,000 seats each way, each week between India and Abu Dhabi. This has resulted in more choice and better connectivity for guests travelling out and into India from across the world. 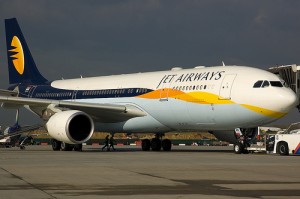 “Together with Etihad Airways, we now operate over 4,300 international flights a month, more flights to/from India than any other airline and provide our guests with an unparalleled global and domestic network, with perhaps the best and most convenient connectivity,” Naresh Goyal said.

The airlines have also aligned their schedules between Abu Dhabi and India to improve flight connectivity between their networks, substantially increasing choice for passengers on both airlines.

“Our partnership strategy has provided value to Jet Airways in excess of $2.5 billion and is delivering lower operating costs and greater efficiency for our two airlines, and contributing strongly to the Indian economy,” James Hogan said.