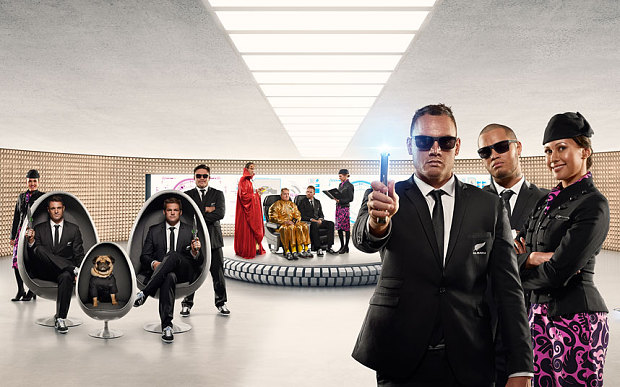 Air New Zealand has teamed up with the All Blacks and an all-star line-up of international rugby greats to tackle the airline’s latest on board safety video, Men in Black Safety Defenders.

Starring alongside the two long-serving All Blacks is Coach Steve Hansen, team mates Kieran Read, Keven Mealamu, Sam Whitelock and Israel Dagg who gets to test his vocals alongside Kiwi musician Stan Walker.

Air New Zealand Head of Global Brand Development Jodi Williams says the airline is crazy about rugby making the All Blacks the perfect partner for its latest safety offering.

“We recently extended our sponsorship of the All Blacks and New Zealand Rugby through until 2020 and thought what better way to celebrate than with a safety video.

New Zealand Rugby Chief Executive Officer Steve Tew says it’s a big year for the All Blacks and with plenty of travel on the cards the team was keen to be involved in delivering the airline’s safety briefing to fellow customers.

“Air New Zealand’s been a long-time supporter of the All Blacks and New Zealand Rugby and has played a crucial role in connecting the team to fans across the globe through inventive and colourful marketing efforts such as Men in Black Safety Defenders.”

Men in Black Safety Defenders began to roll out across Air New Zealand’s fleet as of last week.

The GSA for Air New Zealand in Greece is Discover the World Greece & Cyprus.