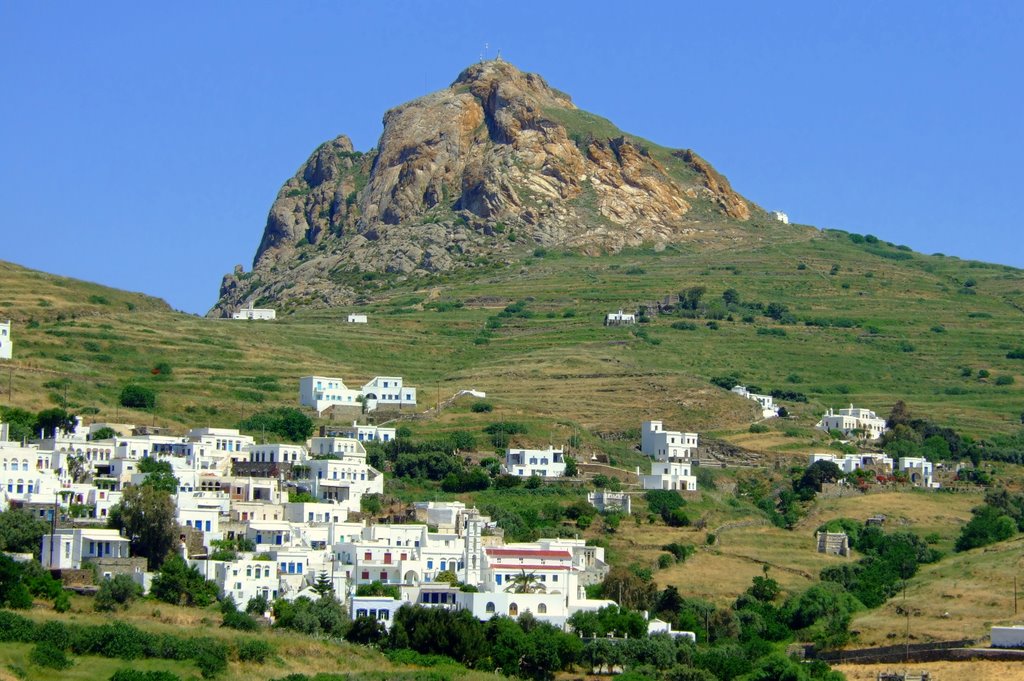 Dozens of the sun’s rays reflect against the ferry. For a minute, most travelers on board the boat to the Cycladic island of Tinos think its their eyes, the summer sun, that extra beer or just plain imagination. Again… numerous dazzling lights reflect against the massive “vapori” making its way past the tiny seaside town of Ysternia on Tinos’ western side. A playful boat horn sounds and way past we go. 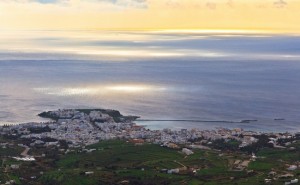 The island of Tinos, has just like most of the Cyclades, seen its men sail off to sea, whether as sailors and captains, or fishermen. As a gesture of farewell, the residents of Ysternia would use mirrors to extend their final goodbyes. Both the travelers and those staying behind would reflect back and forth to keep in touch until the ferry faded away into the distance.

A more modern-day version still sees the Ysterniots (and friends) employing the mirrors approximately a half hour after the vessel departs from the port as it passes in front of the village.

In the days of yesteryear, the arrival of the ferryboat was reason for celebration: it meant foodstuffs and goodies from relatives in Athens, it carried within tourists, their odd habits, fresh outlook and, of course, pocket money and it brought with it change, something different from yesterday, something that would break the day’s routine and offer a welcome distraction from the often unbearably slow-paced life of the isle.

The only shipload of people that is different, is the one rolling into Tinos’ harbour early in the morning of August 15. This is no ordinary day and these are not your usual tourists. As the vessel’s flap door drops open, swarms of people, many dressed in black, others dragging whining children, some in wheelchairs, others barely stable holding canes, emerge in an eager thrust. In between the hoards, the hardcore believers down on their knees, one behind the other, take their place on a velvet-coloured carpet that runs along the portside and spirals through town up the main road to the Panagia (Virgin Mary). 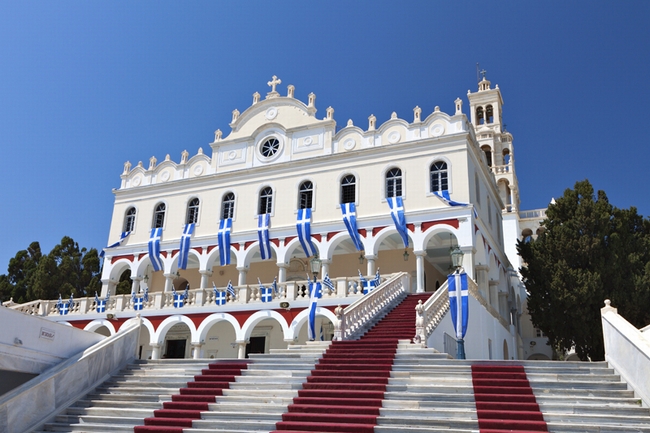 This Virgin Mother is not one of the many found in Greece, She is the Miracle Worker. This is the “Panagia tis Tinou”, who has since 1823, when Her icon was discovered, performed countless miracles: healing, seeking, finding, saving, empowering, inspiring, enlightening… bearing proof that faith is hope and hope is life.

On this day, a feast is held commemorating the Dormition of the Virgin Mary (Koimisis tis Theotokou, meaning Her “falling asleep” and ascending into heaven). Orthodox Christians across the globe venerate the Holy Mother. On Tinos, this day has an additional significance, as it is here in the ground under the massive marble church that Her icon was found.

Vision with a mission

In July 1822, nun Agia Pelagia from the “Our Lady of Angels” (Kyra ton Aggelon) monastery in the village of Kechrovouni, had a vision of the Virgin herself indicating the location of the icon. She asked of Sister Pelagia to notify the authorities so that they would start excavation works. Naturally, Pelagia was reluctant at first, but the Virgin appeared twice again in her dreams and so it was done. Months of digging later, no icon was found. Instead, ancient ruins of the Temple of Dionysus surfaced. The digging would stop amid disappointment and then again divine indications would prompt new attempts.

Finally, on the morning of January 30, 1823, the icon, broken in two, partially burnt and covered in soil was unearthed. The Panagia lay deep in the ground of Tinian Antonis Doxaras’ yard. This was a miracle. The news spread like wildfire throughout the enslaved country amid the ongoing struggle against the 400 years of Ottoman occupation. In the trying times, it was seen as a divine sign. The villagers began to build a church in Her honour on the spot where the icon was found, while the frontrunners of Independence rushed to the island to worship the icon and get Her blessing. Works were completed in 1880 with marble brought in from the neighbouring islet of Delos. 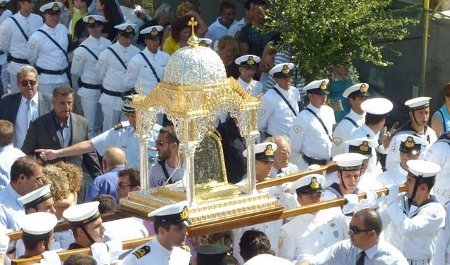 Come August 15, the islands’ chapels, the central church, the surrounding roads and the homes are elaborately decorated. Paved in white marble, the central avenue leading up to the church named “Megalocharis” (The Gift Giving) is overflowing with people; the faithful stand patiently in line to worship the miraculous icon. Beside them, kneeling believers who have crawled their way up to the church as a “tama” (a sign of devotion) to the Virgin in return for Her miracle.

The word “tama” derives from the verb “tazo” which means to vow or promise. On either side of the main thoroughfare, pocket-sized shops are crammed with dangling tokens and votive candles in every shaoe and size imaginable. Worshippers stop here to select the votive that best symbolizes their needs or requests.

At the end of the staircase, leading to the main entrance of the church on your left, barely visible under the dedications (“tamata”) is the unexpectedly small unassuming icon. Around it, thousands of votive offerings, large and small; made of gold, silver, bronze, wood; displaying arms, legs, eyes or any other failing human organ that needs a miracle to be healed… like the heart; some arty, others plain, a few kitsch… all humbly asking the Virgin to work Her wonder.

The devout come here from across the land. Even Diaspora Greeks make a pilgrimage here during their summer visit to the homeland. They ask of Her Holiness to cure them, help find a long lost relative (usually sailors), to offer guidance, give them courage and strength or simply to thank Her for answering their prayers with inspired offerings, some true works of art.

One such token of gratitude is a silver orange tree one sees upon entering the church. It is said that the man who made this masterpiece in Her honour was blind. The Virgin answered his prayers and he offered an exquisitely crafted orange tree of silver as it was the first thing he saw upon gaining his eyesight.

Many of the dedications (votives) are located in a specially created museum in the large courtyard of the church. Among others, the museum also houses the medals of Olympic champions Stelios Miyiakis (wrestling) and Pyrros Dimas, (weight lifter), who dedicated them to the Panagia for her divine “intervention”.

Besides serving as a temple of prayer, the Panagia of Tinos – The Holy Foundation of the Evaggelistria, founded in 1825, is a self-governed and self funded charitable institution. Utilizing the dedications, contributions and donations, it is active in charity, education, scholarship and welfare and is run by a committee made up of Orthodox Tinians and presided over by the Metropolitan Bishop of the Cyclades. 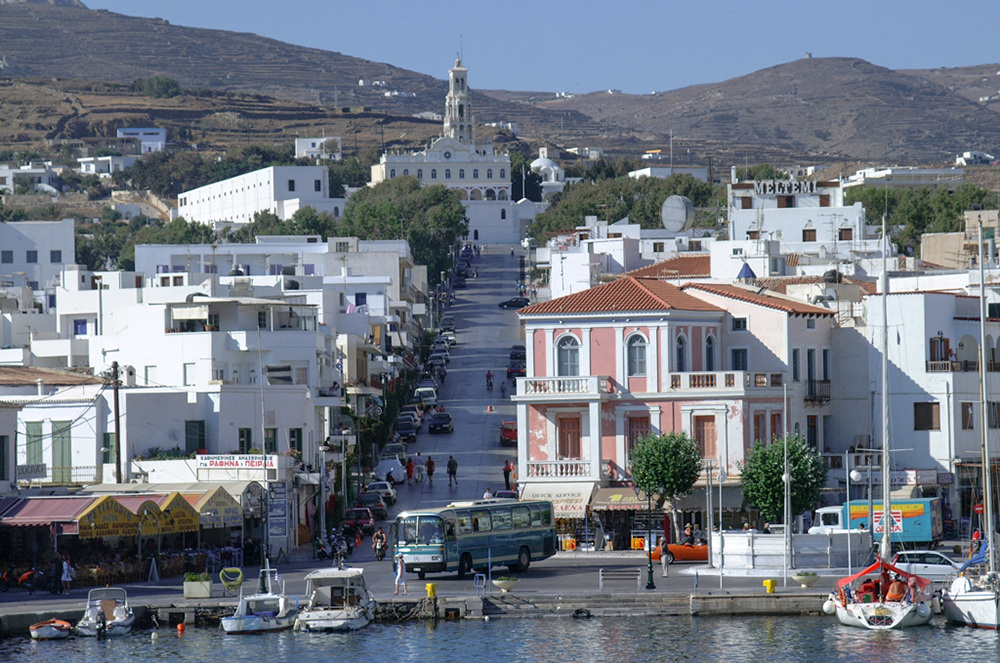 The island of Tinos is perhaps one of the most exciting places to be while in Greece. It has dozens of well-preserved villages in traditional Cycladic architectural stye. Furthermore, together with Syros, it is home to a large Catholic community complete with chapels, schools and pastors. The sheer variety of pristine beaches offers swimming options for all tastes. Whether you’re seeking ultra-thin white sand, playful pebbles, beautiful white and grey flat-stones, deep or shallow waters, Tinos has got it. For the art lover, Tinos is home to some of the finest galleries and museums, being the birthplace of some of the country’s most talented sculptors. It even has its own school of the arts and of marble sculpture. The food, meanwhile, is an experience (and travel story) in and of itself. Home to the famed baby artichoke, the “tiny gems of the sea”, the Tinos capers, and the velvety “tyraki” cheese not to mention the mouthwatering “amygdalota” and its very own award-winning Nissos beer, the island offers such a diverse selection that a culinary trip is definitely a must. 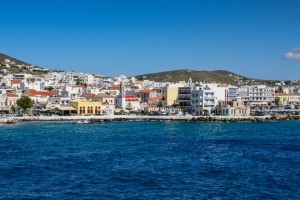 ✓ On the road again… Ships to Tinos depart daily from the ports of Rafina, Piraeus or Lavrio. The trip lasts anywhere between three to five hours depending on the ferry service. Visiting Tinos is best in September or June or during Orthodox Easter.

✓ Settle down… in any of the seaside villages of Tinos, including Ysternia, Agios Yiannis Porto, Agios Romanos, Agios Sostis, Agios Fokas.

✓ Truth or dare… make sure to go to at least one “panigyri” – open-air fair held usually in the church courtyard or central square with traditional instrumentalists, plenty of song, island dance, food and wine.