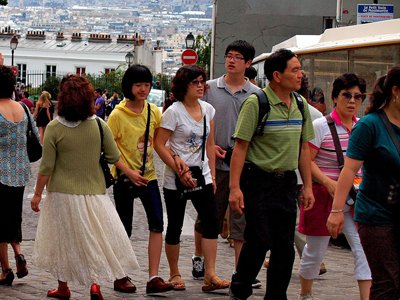 Chinese holidaymakers are opting for shorter trips and lavish accommodation, according to a report carried out by consulting group IPK International on behalf of ITB Berlin, the world’s largest tourism trade fair.

The fastest growing travel market, China saw its nationals go on 105 million foreign trips in 2014, including 41 million day and shopping trips, mostly from southern China to Macau and Hong Kong.

The number of international trips made by Chinese travelers came to 36.6 million, generating 171 million overnight stays in 2014. Compared to 2007, the number of foreign trips rose by 168 percent, an average annual growth rate of 16.5 percent.

However, the number of nights spent abroad only grew by 27 percent in total, which was equivalent to 3.5 percent per year. This was due to a dramatic reduction in the length of foreign trips: in 2007 the Chinese spent 10 nights abroad on average, while in 2014 the average length of a foreign trip has nearly halved to 5.5 nights.

The report cites the explosive growth of 444 percent in short international trips of up to three nights, accounting for a 27 percent annual increase. The strong growth in the last seven years was due to short trips of up to one week, and involved city trips, tours and event visits. Beach holidays have also won market share.

Europe has expanded strongly as a destination for Chinese travelers, with a 7.5 percent yearly rise, but has lost market share to other regions of the world due to their stronger growth rates. A total of 18 percent of Chinese visit Europe.

Although flying leads as the leading mode of transport at 80 percent, cruise travel is gaining ground fast. The Chinese use the internet to book foreign trips, with the number of bookings up by 1,300 percent in the past seven years. Four out of five Chinese research and book online, selecting offers from travel agents and tour operators. Direct booking of accommodation and transport, with 17 percent each, also have significant growth potential.

In the meantime, all the more Chinese travelers are now opting for overnight stays in first-class hotels up by 28 percent.