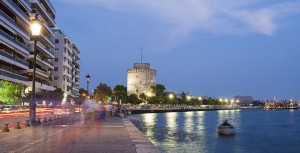 The number of overnight stays in the northern port city of Thessaloniki, for the first half (January-June) of 2015 increased slightly but was smaller compared to last year’s corresponding period with a 10.74 percent rise at 1,006,654 overnight stays in 2015, compared to the first half of 2014 at 909,064, according to a recent report released by the Thessaloniki Hotels Association (THA).

The THA attributes the steady performance to the ongoing talk of a possible “grexit”, the introduction of capital controls during the peak of the tourist season as well as the resulting negative media coverage in this time.

Thessaloniki hoteliers, meanwhile, are expressing their concerns over announced VAT hikes on accommodation that are bound, they say, to deprive Greece of its competitive edge against other destinations.

According to research conducted by GBR Consulting for THA, room prices  increased by 5.3 percent in the first six months of 2015, while Thessaloniki continues to lag behind other European cities such as Dusseldorf, Edinburgh, Hamburg, Salzburg and Budapest among others, with regards to occupancy levels and revenue per room.

With regards to Thessaloniki’s most visiting nationalities during the first six months of 2015, Greeks top the list, up by 9.12 percent at 559,567, compared to the same period last year.

Tourists from Cyprus take the lead in the international visitor category with 55,658 overnights, marking a 23.86 percent increase compared to last year. Visitors from Turkey came in second with a total of 35,977 overnight stays, up by 3.52 percent. The number of German visitors rose, climbing to the third spot from the fifth in 2014, with 27,581 overnights, up by 17.20 percent.

In the meantime, Greek Tourism Confederation (SETE) President Andreas Andreadis told SKAI television today that despite the negative climate and the capital controls, the sector can achieve its goals for 2015, but warned that in 2016 the industry is bound to feel the brunt of the increase in VAT rates in accommodation.