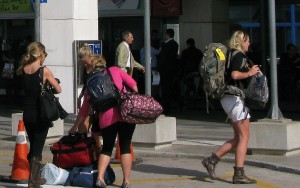 Eighty-seven percent of the revenue generated by Greece’s inbound tourism remains in the country, according to a study of the Centre of Planning and Economic Research (KEPE) that was released on Tuesday.

The study was carried out on behalf of the SETE Institute (InSETE) and confirms the major importance of Greek tourism to the national and local economy.

KEPE’s study, which was conducted from November 2014 until July 2015, focused on how much money spent by tourists remains in Greece and how much is “leaked” to the economies of other countries.

The “leakage” of tourism revenue from Greece’s accommodation sector last year amounted to 13.3 percent (978 million euros of 7.4 billion euros). The “leaks” abroad included money for imported technological equipment products and the salaries of non-residents that were employed in Greece.

According to the study, tourism is one of the most central sectors of the Greek economy (8th out of a total of 64) and has a strong correlation with the agricultural sector, particularly in high-class hotels.

The Greek Tourism Confederation (SETE) believes that the findings of the study are very positive and underlined in an announcement that the percentage of the total inbound tourism revenue that remains in Greece can significantly be strengthened further through initiatives and concrete measures under a national strategic plan for tourism development.

According to SETE, these measures would include the establishment and usage of certified “Made in Greece” products and the creation of all-inclusive packages that would mainly be based on the consumption of local products.

KEPE is the largest economics research institute in Greece.

The study is available (in Greek), here.

Greek Destinations That the Germans, French, Italians and Brits Love This Year

Greek Depositors Allowed to Withdraw Weekly €420 as of Wednesday, July 29