Greek Referendum Toll on Tourism in the Spotlight 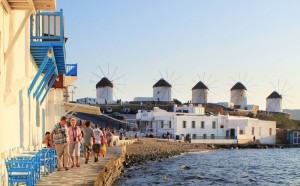 The Greek tourism sector is calling on all professionals to remain collected and optimistic as they look for ways to save the season, following a week of closed banks, negative media coverage and a referendum calling for no more stringent austerity measures imposed from abroad.

“The damage to our tourism is already a given. Developments in the coming days will define the extent,” Greek Tourism Confederation (SETE) President Andreas Andreadis wrote on his Twitter page on Monday morning. The night before he tweeted that “Spain is having the best tourist season ever because Tunisia and Greece’s tourism ‘suicide’”.

Tourist professionals across Greece are now putting Sunday’s decision behind them and looking to get the season going, expecting that liquidity will ensue in the coming days.

The Greek islanders, where most of the country’s primary summer tourist destinations are located, voted against the austerity measures imposed by Greece’s international creditors in Sunday’s referendum.

Greece’s creditors were insisting the government increase VAT on accommodation and do away with a special reduced tax status for the islands.

Experts stress that the normalization of the market and of banking transactions is vital if tourist enterprises are to remain above water so that imports and supplies come in and payments be made.

Other problems cited include a plunge in last-minute bookings, with reports speaking of 50,000 bookings less daily, affecting mostly smaller accommodation facilities which do not offer all-inclusive deals. According to some reports, the political turmoil in Greece is sending tourists to neighbouring Spain, despite the friendly exchange rate and even friendlier prices.