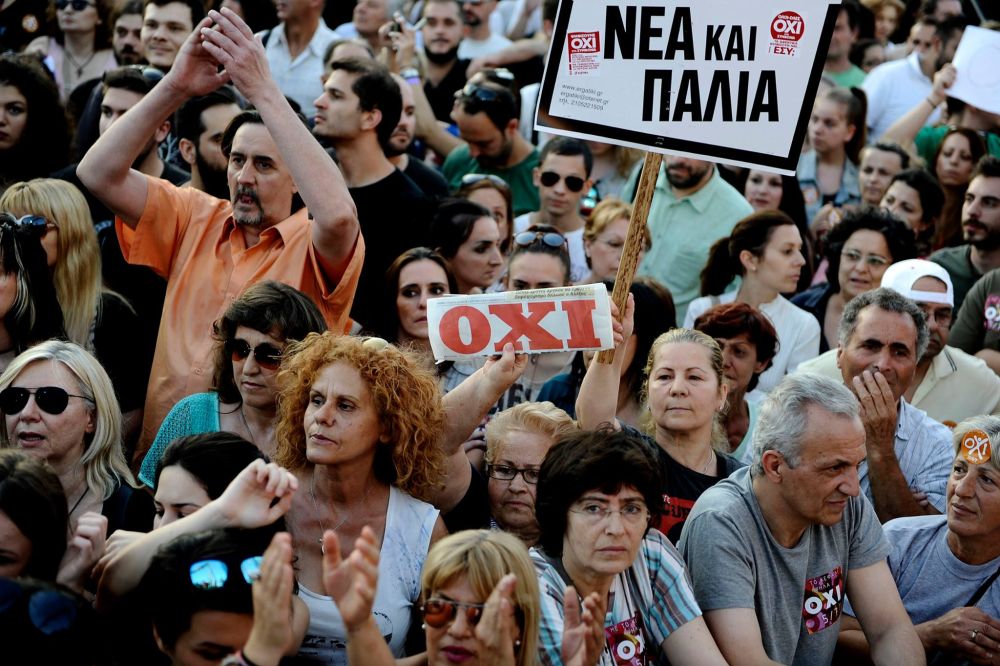 Supporters of the “No” vote. Photo credit: Aggeliki Koronaiou

Over 61 percent of Greeks voted “no” to creditors’ austerity terms in Greece’s referendum on Sunday.

Greece’s referendum question: Should the draft agreement, submitted by the European Commission, the European Central Bank and the International Monetary Fund to the Eurogroup of 25/6/2015, consisting of two parts that constitute their proposal be accepted? The two documents that form the creditors’ proposal: “Reforms for the Completion of the Current Program and Beyond”, and “Preliminary Debt Sustainability Analysis”

The referendum came after an agreement was not reached for a renewal of Greece’s bailout program and the country failed to make a 1.5 billion euros repayment due to the International Monetary Fund (IMF).

Prime Minister Alexis Tsipras called for the referendum last week and insisted that a “no” vote would strengthen Greece’s position to negotiate a better deal with the European Central Bank, the International Monetary Fund and the European Commission.

Since the referendum announcement, Greek banks have been closed and capital controls introduced to prevent the collapse of its financial system.

“Our immediate priority is to restore the banking stability to normality”, the Greek PM said in a public statement on Sunday night.

Tsipras clarified that the Greek people did not answer a yes/no question of staying in the euro.

When the referendum was announced, pro-euro parties and eurozone policymakers warned that a “no” vote would raise uncertainty of Greece’s place in the eurozone.

“That question must be gone forever. We said that we want a Europe of democracy and solidarity”, he said.

He added that Greece will insist on debt restructuring during negotiations with creditors. Reports on early Sunday said that the government expects a new aid deal to be reached with the country’s creditors 48 hours after the referendum.

“Tomorrow, with the brave ‘no’ endowed to us by the Greek people, we will extend a hand of cooperation to our partners”,  Finance Minister Yanis Varoufakis said in a public statement on Sunday night.

A eurozone summit is expected to take place on Tuesday.

German Press Dismayed With Greece’s ‘No’