Greek Tourism Says ‘Yes to Greece, Yes to the Euro’

Greece’s Social Partners SETE (Greek Tourism Confederation), SEV, GSEVEE and ESEE, are participating in a newly-launched pro-Europe committee dubbed “Yes to Greece, Yes to the euro”, a communication campaign launched to inform the Greek citizens on why the country must remain in the euro.

The committee’s first action took place at Syntagma Square on June 30, at 7:30 pm, where, all together, all supported “Yes to Greece, Yes to the euro” (see following photo). 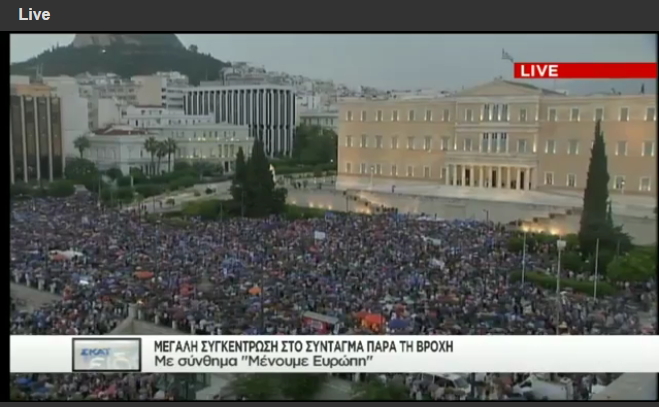 Over 20.000 Greeks said YES to the euro at the event held by “Yes to Greece, Yes to the euro” committee. Photo source: Facebook page “ΝΑΙ στο ΕΥΡΩ”

“Yes to Greece, Yes to the euro” was created after the government called for a July 5 referendum, which led to banks shutting their doors for a “bank holiday” in effect through to Monday, July 6.

“For us the real question of the referendum is not what was officially announced (YES or NO to the demands of the country’s creditors)… For us the real question is how we see the future of the country… We dream of a country creative, productive, extrovert, dynamic and dignified, a country open and free”, the committee said in an official announcement.

The committee is expected to carry out a series of other actions in the coming days.

IMF: Greece is Now in Arrears