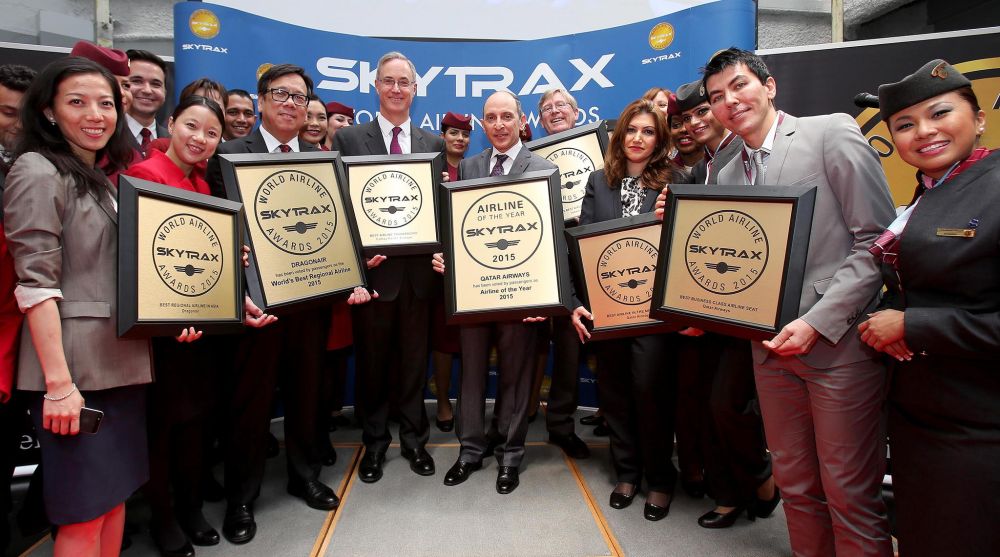 Qatar Airways was honored on Tuesday with three of the top aviation accolades at the annual Skytrax World Airline Awards, held at the Musée de l’Air et de l’ Espace, Paris Air Show, winning Airline of the Year for a third time.

“The highest ranking in the annual Skytrax awards category, Airline of the Year is a testament to the commitment and dedication to service excellence and a high-quality travel experience for all passengers that fly with Qatar Airways. It is a reflection of the five-star calibre service that the Qatar Airways is renowned for”, Qatar Airways said in an announcement.

The award comes at a time when the airline has experienced remarkable growth, given the major enhancements to its fleet in the last 10 months, with the entry into service of the Airbus A380 and the Airbus A350 as the Global Launch Customer.

In addition to the Airline of the Year award, the airline also collected two other awards: Best Business Class Airline Seat and Best Airline in the Middle East — which Qatar Airways has won for the eighth time.

“These accolades reflect our passengers’ satisfaction; they choose to fly with a five-star airline and today they have chosen Qatar Airways as the World’s Best Airline for the third time”, said Qatar Airways Group Chief Executive Officer, His Excellency Mr. Akbar Al Baker.

“Our passengers are at the heart of everything we do at Qatar Airways, and we are very proud to be recognised by them and to receive these three Skytrax awards.”

The Skytrax World Airline Awards are widely known as the Passengers Choice Awards with millions of travellers, from 160 different countries, participating in passenger satisfaction surveys to decide 2015’s winners.

Qatar Airways’ modern fleet is on display at the Paris Air Show 2015, the airline is showcasing the best of its latest generation aircraft with five on display – the Airbus A380, A350 XWB, A320 and A319 and a Boeing 787 Dreamliner.