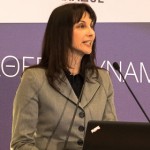 Alternate Tourism Minister Elena Kountoura will depart for Seoul on Wednesday to promote Greece as a destination for travellers from South Korea. Seoul is the capital and largest metropolis of South Korea.

The visit is also in conjunction with Greece’s participation in the Korea World Travel Fair (KOTFA), the largest international travel fair in Korea where 60 countries are participating to promote their tourism resources and cultures.

As part of the fair, various events including the promotion of tour items and destinations, exhibitions of tourism souvenirs, tourism seminars and world folk performances will take place. KOTFA 2015 will run from June 11 to June 14.

During her stay in Seoul, Ms. Kountoura will meet with the Minister of Tourism, Culture and Sport of South Korea Kim Chong, the Minister of Patriots and Veterans Park Chung Soon, Korean Air representatives and leading Korean tour operators. She is also scheduled to give interviews to leading media outlets of South Korea.