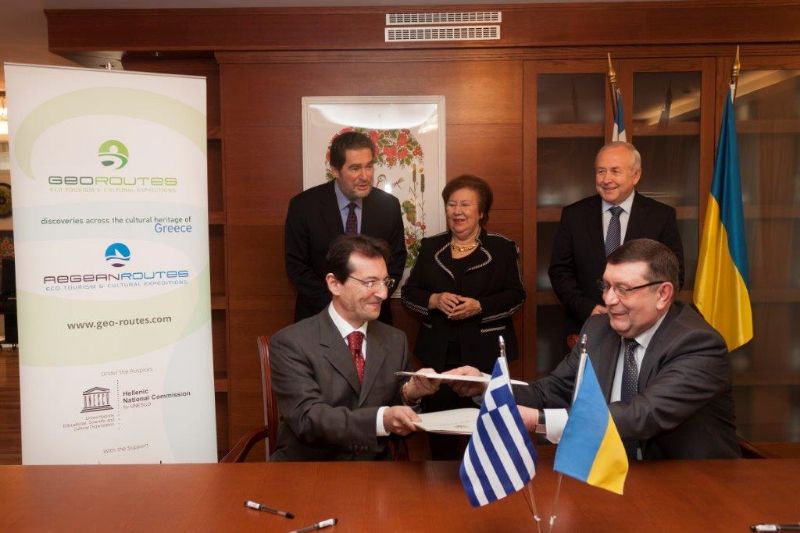 Greece’s Geo Routes Cultural Institute has signed a Memorandum of Understanding and Cooperation with Ukraine’s National Kyiv-Pechersk Historical & Cultural Preserve that aims at the strengthening of the inter-cultural dialogue, the mutual understanding, the familiarization and the cultural awareness between Greece and Ukraine. The memorandum was signed earlier this year during a ceremony at the Embassy of Ukraine in Athens.

The ceremony, which took place at the Embassy of Ukraine in Athens, was attented by the Ambassador of Ukraine HE Volodymyr Shkurov; the President of the Hellenic National Commission for UNESCO, Ekaterini Tzitzikosta; the ex. Director General for International Economic Affairs of the Hellenic Ministry for Foreign Affairs, Ambassador Michael Christides, and representatives from the business and cultural sectors of Greece.

According to an announcement, the Director General of National Kyiv-Pechersk Historical & Cultural Preserve, Lubomyr Mykhaylyna, and the President of Geo Routes Cultural Institute, Giannis Balakakis, have agreed to set up working committees to develop and deliver projects related to the promotion of Cultural Heritage,  Environmental protection, Social Responsibility and Sustainable Development.

The Geo Routes Cultural Institute is part of the Geo & Aegean Routes experiential, cultural and environmental journeys, held under the auspices of the Hellenic National Commission for UNESCO and supported by the European Commission Representation in Greece. The journeys provided by Geo & Aegean Routes aim at highlighting the “other side” of Greece, promoting the country’s cultural heritage and contributing to the development of the local society through Corporate Social Responsibility programs.

The National Kyiv-Pechersk Historical & Cultural Preserve is a huge museum complex, part of the Kiev Pechersk Lavra in Kiev, also known as the Kiev Monastery of the Caves.

Since its foundation in 1051 the Lavra has been a preeminent center of the Eastern Orthodox Christianity in Eastern Europe. Together with the Saint Sophia Cathedral, it is inscribed as a UNESCO World Heritage Site. Under the administration of the Ministry of Culture of Ukraine, the complex includes the State Museum, National Kiev-Pechersk Historic-Cultural Preserve, the Ukrainian Orthodox Church, the residence of the Metropolitan Onuphrius, the Great Lavra Belltower, numerous churches, St.Nicholas Monastery, the Kiev Theological Academy, as well a very complex system of narrow underground catacombs, that house numerous living quarters and underground chapels.

Day Event Focuses on Birdwatching, Ecotourism as a Way to Boost Thessaly Economy

Greek Exports Rise as Local Companies Do Business in Germany