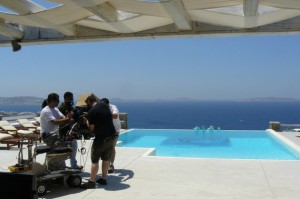 Aware of the huge potential of attracting international film producers to Greece, the government is preparing a flexible legal framework that will provide the incentives to get cameras rolling on Greek soil.

Authorities from the culture, tourism, state, development and finance ministries met on Wednesday, to discuss among others the creation of a body that will oversee the licensing procedures and deal as a mediator between foreign and Greek producers and companies as well as cut the red tape. The government authorities, to meet again next week, also discussed potential tax breaks as implemented in other EU countries.

“Greece has all the advantages to become a unique location for international film productions,” State Minister Alekos Flambouraris said after the meeting, pointing to the benefits to tourism, employment and finances.

“Greece has a unique light, a fine tool for filmmakers, many different landscapes concentrated in a small geographic area thus facilitating a variety of different shooting conditions and condensing production costs, and Greeks, who as actors, technicians and extras, among others, have already proven themselves in top productions such as The Guns of Navarone, Zorba the Greek, Captain Corelli’s Mandolin, Mamma Mia!, Tomb Raider and The Two Faces of January.”