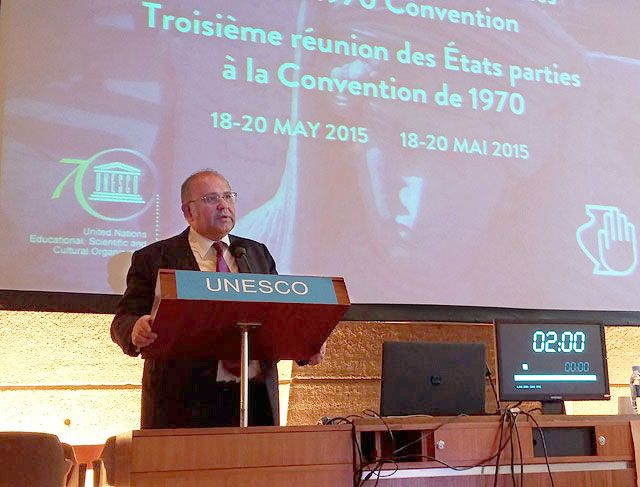 Greek Alternate Culture Minister Nikos Xydakis speaking at the Third Meeting of States Parties to the 1970 Convention on the Means of Prohibiting and Preventing the Illicit Import, Export and Transfer of Ownership of Cultural Property, at UNESCO Headquarters in Paris.

Greek Alternate Culture Minister Nikos Xydakis invited the 127 UNESCO Convention signees to join forces towards extending legislation and boosting the presence and jurisdiction of police and customs authorities in order to effectively tackle the illegal trade of cultural property as well as introduce secure ways to control transactions of art online.

The Greek minister, who spoke during UNESCO’s international conference on cultural property held in Paris this week — the third such meeting since 1970 — proposed the “Stop Illicit Trafficking” initiative, which also foresees cooperation on an intergovernmental level including more effective use of databases and infrastructure developed by international organizations such as INTERPOL, the World Customs Organization and the UN Office on Drugs and Crime.

Mr Xydakis also expressed his concern over the damage caused in war zones. “We note with grave concern the siege of Palmyra (Syria) and hope that even at the last moment there will be a way to prevent destruction or looting of the site,” he said.

“Unfortunately, Hellenistic antiquities have the regretful ‘privilege’ of being highly sought after on the international art market,” the Mr Xydakis said, adding that the ministry was preparing a special mission to Iraq on this issue.

SETE: VAT Rise Will Damage Tourism and Wipe Out 200,000 Jobs in Greece

IVF Can Become Driving Force Behind Medical Tourism to Greece