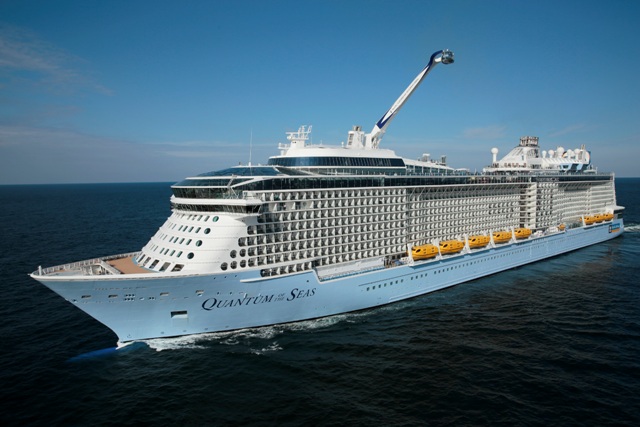 Quantum of the Seas.

Shipping Minister Thodoris Dritsas, Alternate Tourism Minister Elena Kountoura and the US Ambassador to Greece David Pearce were at the port of Piraeus on Monday morning to welcome the Quantum of the Seas, one of the largest cruisers to dock at the Greek port.

Launched in 2014, the 1 billion dollar Royal Caribbean dream ship has 2,090 staterooms plus 28 for solo travellers, 16 guest decks served by 16 lifts, 18 restaurants ranging from Asian and Italian to pub-style and steakhouse options, and a total 1,500 crew members from 68 countries serving its passengers.

But what makes the Quantum of the Seas special is the latest in technology as well as the limitless recreational activities on board including bumper cars, simulated skydiving and circus trapeze classes, a rock-climbing wall, roller-skating, basketball, a shuffleboard court, the North Star observation dock that swings daring passengers some 92 meters above the sea so they can catch a bird’s-eye view and robots mixing drinks at the bionic bar.

On a more human level, super chefs Jamie Oliver, Michael Schwartz and Devin Alexander have drawn up innovative meals for passengers, who book their meals and activities via apps.

“The Quantum of the Seas is not only changing the perception of cruise holidays but of the holiday experience for today’s traveler,” said Andreas Stylianopoulos, President and CEO of Navigator Travel, the exclusive representative of Royal Caribbean LTD in Greece.

“It’s not only how one travels but the experience from beginning to end. With Quantum of the Seas we encourage our customers to model their voyage according to their needs, thus providing unprecedented freedom and options.”

In the meantime, Quantum’s sister ship Anthem of the Seas is expected to hit the seas in November.

As of June 25, Quantum of the Seas will be based in Shanghai.

Kea Island Pays Tribute to Andrea Paouris with Half Marathon