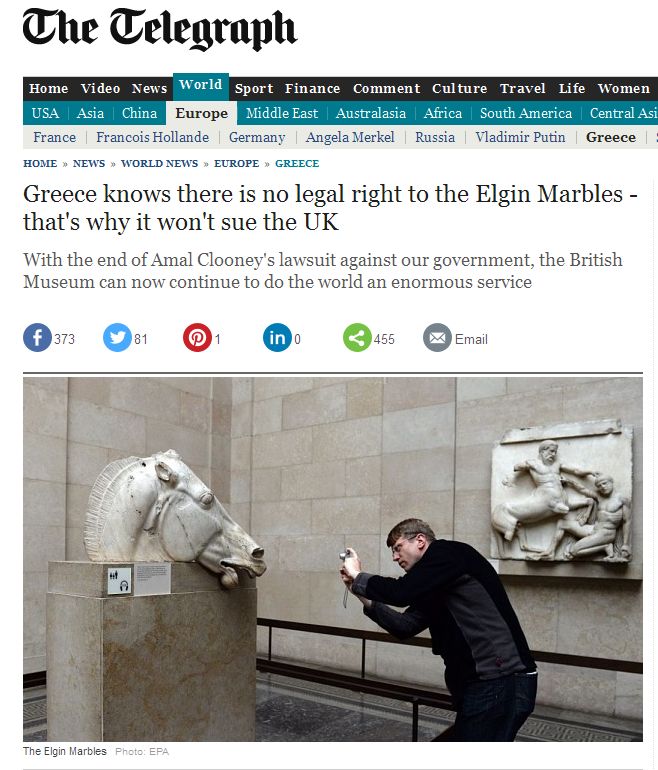 Hours after the Greek government announced on Wednesday, that it would not seek legal action against the British Museum and the British government for the return of the Parthenon Marbles, rejecting the advice by its high profile legal team, the Telegraph started off its story claiming that Greece finally “acknowledges that the British Museum is the lawful owner of the ‘Elgin Marbles’”.

According to the British daily, in its 150-page report, the team of lawyers found that the Greek government had only a 15 percent chance of success in a British court, and that Greece should consider pursuing the claim in the International Court of Justice. The Telegraph went as far as to interpret this information as Greece not having a case at all.

However, the report drawn up by the British barristers said that Greece should take legal action and urged the government to do so in the near future suggesting a number of alternatives.

Meanwhile, the British paper continues… “with the end of Amal Clooney’s lawsuit against our government, the British Museum can now continue to do the world an enormous service”, referring to the Greek sculptures that were removed illegally from Greece in 1803 by Lord Elgin, later to be housed in the British Museum, which the Telegraph claims is now the “lawful owner”.

For over three decades, Greece has repeatedly called on the British Museum to return the 2,500-year-old marble sculptures that once adorned the Parthenon with all the more groups and figures of international acclaim calling for the return of the Greek sculptures to their birthplace.

In a question to Greek Deputy Culture Minister Nikos Xydakis on Thursday with regard to Greece’s plan for the return of the Marbles, he said that though legal advice is useful and reinforces Greece’s arguments for the return of the antiquities, the Greek government has never said it would take legal action in the future, adding that the legal alternative is only one among many other strategies.

“The long political and diplomatic battle to raise awareness internationally has already led to impressive results. The majority of the public opinion, even in the UK, welcomes the return of the Marbles,” Mr Xydakis concluded.