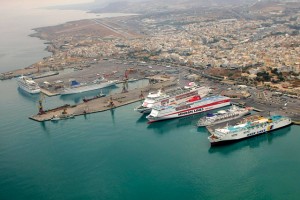 Promoting tourism, exchanging expertise in the area of container management and cruise travel topped talks on Tuesday, between representatives from the Chinese city of Wuhan and Crete’s Heraklion Port Authority (HPA).

A major transportation hub, Wuhan is the capital of the Hubei province and the most populous city in Central China. Other issues addressed at the meeting held at HPA headquarters included the cooperation between the two ports and the future signing of a twin city pact between Heraklion and Wuhan.

The visit came following the Friendly Relations and Cooperation agreement signed last December, between the Region of Crete and the Municipality of Wuhan, during which both parties pledged to work together in the areas of trade, public services, culture, health, education and tourism.

During the visit, the Wuhan delegation had the chance to visit the Heraklion port facilities while the two parties discussed the potential for growth, particularly with regard to cruise travel. Following the tour, the Chinese guests were treated to traditional Cretan cuisine.

The meeting took place within the framework of the ongoing “Year of Greece-China Cooperation”. An HPA delegation is scheduled to visit Wuhan in the near future after the foreign affairs ministry approves of the sister city pact.