Greece rose one position in the sixth Travel and Tourism Competitiveness Report as it ranked 31st among 141 countries. The biennial report was released on Thursday by the World Economic Forum (WEF) and ranks 141 countries according to their attractiveness and ability to develop their travel and tourism industries.

Spain heads the Travel & Tourism Competitiveness Report 2015 for the first time ever — thanks to its cultural resources, infrastructure and adaptation to digital consumption habits — and is followed by France, Germany, the United States, the United Kingdom, Switzerland, Australia, Italy, Japan and Canada.

According to the report, Europe — with a total of six economies — is confirmed as the region with world-class tourism service infrastructure, excellent health and hygiene conditions and — notably, thanks to the Schengen Area — high degree of international openness and integration.

Greece ranked 18th in Europe, up four places from the last report in 2013. 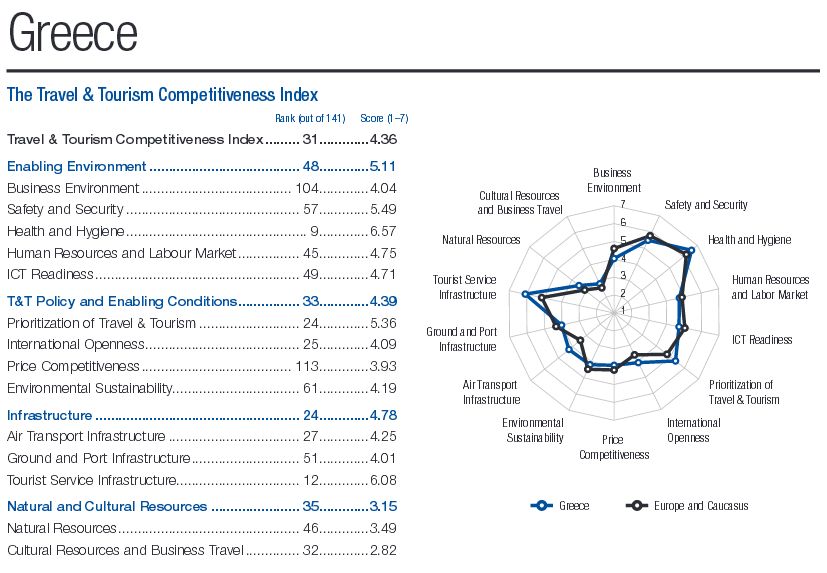 This year’s report was published under the theme “Growing through Shocks” and was produced in close collaboration with the International Air Transport Association (IATA), the World Tourism Organization (UNWTO) and the World Travel and Tourism Council (WTTC), among others.