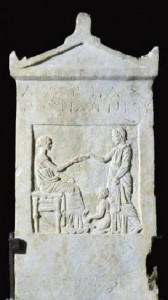 The Greek culture ministry is demanding that an April 15 Christie’s sale of a 4th-century BC marble funerary stele for over $136,000 be called off as the artifact has been illegally removed from the country.

In a letter sent on Wednesday to the London auction house, the Greek culture minister is demanding the grave stele from Halkida be withdrawn from sale.

The said artefact, a marble stele dating back to 350-325 BC, was found in the ancient cemetery of Halkida on the island of Evia. According to the Greek culture ministry, records reveal that it was illegally removed from the country. The London auction house, meanwhile, claims it belonged to a French collector acquired prior to 1994.

“The Culture Ministry monitors all auctions of cultural goods and in cases where there is evidence of illegal export or activity, it undertakes all legal actions,” the ministry letter says.

According to Greek daily Kathimerini, four more artefacts — three ancient Greek vases and an Etruscan head valued at 100,000 pounds — have been withdrawn from the same Christie’s auction following an investigation by Cambridge professor Christos Tsirogiannis in cooperation with Interpol and the Italian authorities.

A member of the Trafficking in Culture crime squad, Mr Tsirogiannis told the Athens News Agency: “It is no surprise that Christie’s is yet again auctioning off antiquities, the legality of which is questionable or non-existent.”

“The Greek authorities have been in contact with us regarding the ‘Dorias Poseidoniou’ stele. We have taken the information provided seriously into consideration. Based, however, on our own research and according to British law, we are convinced that the auction can continue. For this reason we will not withdraw this object,” Christie’s responded on Wednesday.

Mr Tsirogiannis said that his investigation has nothing to do with the artifact mentioned in Christie’s letter.

GNTO Earmarks Almost 1 Million Euros to Promote Greece in Europe, US Via Google