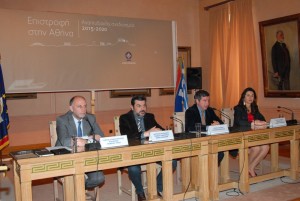 “Back to Athens” is the central theme of the municipal authority’s new five-year development program presented to the press on Monday, by Athens Mayor Giorgos Kaminis, which aims to make the Greek capital an attractive and active centre of growth by 2020.

Consisting of 70 measures, actions and initiatives, the “Comprehensive Urban Intervention 2015-2020” scheme includes everything from upgrading the image of the city with architectural renovations and restorations, and boosting innovation and enterprise, to tapping into Athens’ tourism potential and offering incentives that will motivate people to seek residence again in the centre of the city.

Mr Kaminis stressed that for Athens to regain its allure, all parties affected must join forces, and invited everyone to work together in this direction.

“For the first time in the city’s history, there has been well-researched development plan that involves all parties,” he said. 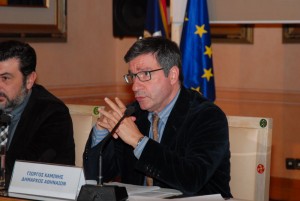 In the area of tourism, Mr Kaminis referred to the initiatives undertaken in 2014 that resulted in a 30 percent increase in tourist arrivals to the city. He revealed that the city will be organizing events of international appeal, such as the 3rd Travel Trade Athens show set for April 26-27 as well as the “Documenta 14” contemporary art exhibit in 2017, among others.

Mr Kaminis said that in efforts to boost entrepreneurship, the city will by the end of the year draw up 12 specialized business studies, offer support to 1,500 enterprises, organize more than 250 related events and lead 10 entrepreneurial missions abroad.

In the meantime, Mr Kaminis slammed the government for failing to take action concerning the constant influx of illegal migrants into the country, who mostly seek refuge in the Greek capital, calling, on the authorities to accelerate legal initiatives that will make life easier for legal migrants, such as offering citizenship to second-generation children.