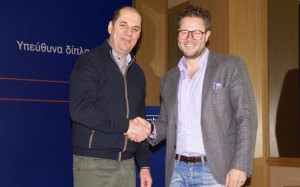 Online travel agents Travelplanet24 and Airtickets announced on Wednesday, plans to merge in the coming months with the combined company creating the fifth largest group in Europe, and the largest e-commerce enterprise in Greece.

Headquartered in central Athens, the new company – with each entity retaining its brand name – will employ about 300 staff and have offices in Russia, Romania, Poland, Turkey and Brazil. Besides working in online air bookings, it will also focus on providing boat and train reservation services.

Travelplanet24’s Philipp Brinkmann retains his position as CEO of the new entity and Airtickets’ founder Dimitris Kontogeorgos takes over as president.

Mr Brinkmann told Greek daily Kathimerini, that the new company is aiming for a turnover of plus 1.1 billion euros by 2018, and added that they are currently looking into acquisitions of smaller companies active in Europe. Expected turnover of the merged entity for this year is set to come to 570 million euros compared to 500 million euros in 2014, with a forecast for 2016 at 710 million euros.

Mr Brinkmann added that approximately 80 percent of all reservations are made in foreign markets, including Britain, Germany, Russia and Scandinavian countries.

On his part, Mr. Kontogeorgos said the union of these two market forces promises to significantly enhance the Greek economy, forming one of the largest companies in Europe in a very competitive field.

Ranking among Europe’s Top 10 largest online travel agencies, Travelplanet24 operates in 40 markets. Founded in 2000, Airtickets was a pioneer in e-business travel in Greece.