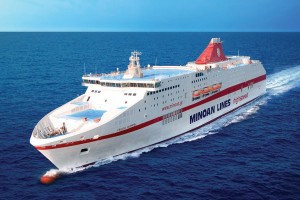 According to the company, turnover for 2014 came to 168.2 million euros with earnings before interest, taxes, depreciation and amortization (EBITDA) at 20.2 million euros, a 25.5 percent rise.

Consolidated net profit after tax for 2014 came to 0.1 million euros.

Minoan said that despite the serious difficulties faced by passenger shipping due to the significant drop in traffic, a result of limited income and increased competition, the company managed to significantly improve its financial performance.

Furthermore, in 2014, the company operated the Adriatic line (Patras-Igoumenitsa-Ancona-Trieste) including the port of Ravenna, achieving high market shares. In 2014, Minoan transported 431,000 passengers.

In its Iraklion-Piraeus route, Minoan handled 777,000 passengers in 2014, maintaining its leading market position.