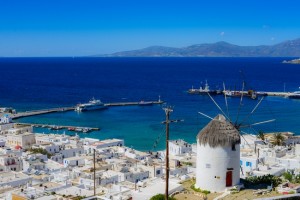 The Greek Government may increase the Value Added Tax (VAT) rate for the popular islands of Mykonos and Santorini, according to Alternate Finance Minister Dimitris Mardas.

“There is a possibility of a VAT increase for two islands (Mykonos and Santorini) and the issue is on the negotiating table with our lenders,” Mr. Mardas told STAR channel on Wednesday.

He did however rule out the possibility of massive VAT increases to hotels and food.

Mykonos and Santorini are among the dozens of Aegean islands for which the VAT rate is currently reduced by 30 percent against the current rate that applies for the rest of Greece. This regime was imposed to offset the high cost of transporting goods and to boost tourism development.

Finance Minister Yiorgos Stathakis also referred to a possibility of a VAT hike for Mykonos and Santorini while speaking to SKAI channel. However, he added that “you can not increase the total VAT on tourism at the beginning of the season”.