Piraeus Port Sell-off to Move Ahead as Scheduled 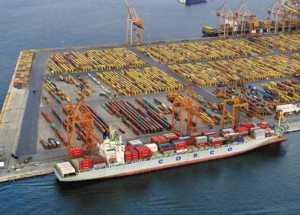 Privatization of Piraeus port will proceed as scheduled with the finalization of the sale to be completed within weeks, according to Chinese news agency Xinhua.

The Greek government had initially said that all privatization projects would be reconsidered in order “to improve conditions and maximize the long-term benefits to the public, increase revenue, enhance competition in local economies, restore the national economy and enhance long-term growth prospects”.

However, on a recent visit to China, Deputy Prime Minister Yannis Dragasakis said that Cosco and other bidders for the Piraeus Port Authority (OLP) “can make a very competitive offer” and added that the deal would be completed in weeks.

Chinese shipping giant Cosco has managed the port’s two central container terminals since 2008, when it inked a 35-year deal with the Greek government. The port has since seen an eightfold increase in commercial traffic with companies like ZTE and Hewlett-Packard using the cargo terminals as logistics hubs for their merchandise.

The Chinese shipping conglomerate, which is one of five preferred bidders for a 67.7 percent share in the Piraeus port authority, was aiming to get complete control of the port, including its passenger ferry operations serving millions of travellers annually.

A total of 500 million euros are expected to go to state coffers if the deal goes through, the Wall Street Journal reports.

Next on the country’s privatization agenda is the 1.2 billion euro concession of 14 regional airports.